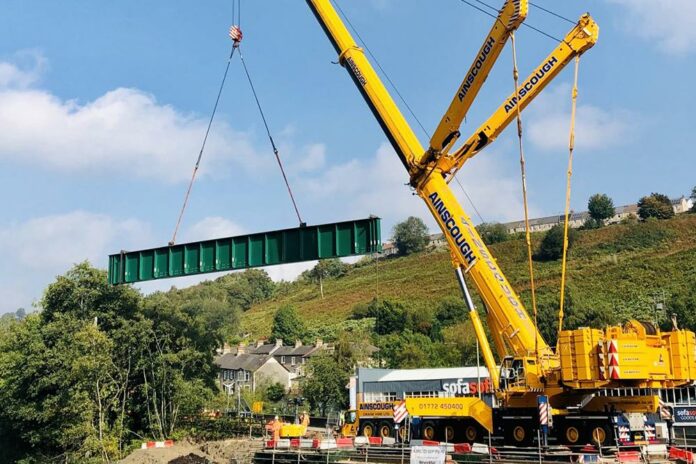 At 06:30 on Monday 28th September AmcoGiffen and Network Rail successfully re-opened the River Ebbw Bridge on schedule to rail traffic following an intensive programme of replacing and increasing the capacity of the time-expired structure.

Engineering teams and supply chain partners worked round the clock via two 50-hr disruptive possessions and a 9-day blockade to complete the works, minimising disruption to passengers and local communities, whilst completing the work safely, and on-time.

The River Ebbw Bridge is located on the WVL at 11m 48ch. The structure crosses the river Ebbw which run adjacent to the A467 in Crumlin, Wales. The project scope was to remove the existing superstructure and install a new superstructure, with Network Rail delivering the associated track design and track installation.

Funded by the Department for Transport, this £5m investment saw the current bridge replaced with a wider deck able to carry two railway lines across it. These works contributed to the wider Ebbw Vale Frequency Enhancement Scheme, funded by Welsh Government, to enable a more frequent rail service on the Ebbw Vale line in the future.

AmcoGiffen were required to complete all other associated works including design and build of the new bridge with the challenge of using a 750t crane, close to the river, whilst maintaining operational use of the A467, a strategic trunk road to Newport. The solution was to create an earth retained crane platform that could offer structural support for the crane whilst displacing the load away from the existing retaining wall for the River Ebbw.

Working with multiple stakeholders, including Blaenau Gwent and Caerphilly County Borough Council’s and Transport for Wales, buses were made available on the specific dates to transport passengers between Ebbw Vale Town and Newbridge stations, minimising disruption for local communities and commuters using this vital transport link.

Andy Crowley Wales & Western Operations Director commented: “I am really proud of how everyone worked collaboratively day and night to get this vital bridge re-opened on-time. The support from Network Rail and commitment from our operational staff and local supply chain has been excellent, enabling a safe and timely completion – slightly ahead of schedule.”

Network Rail’s Project Manager for the scheme, Thomas Edwards, said: “AmcoGiffen and its subcontractors, through close collaboration with Network Rail, have recently completed the replacement of River Ebbw Bridge, Crumlin in a 9-day blockade. AmcoGiffen performed excellently on the lead up to, and throughout the blockade, and the attention to detail shown in their planning and preparation resulted in the works within the 9 days being complete without accident or incident, to a high quality and with a right time possession handback.

“COVID-19 brought a new dimension to the works and AmcoGiffen took all required steps to ensure that the works could be complete while keeping all staff safe.

“AmcoGiffen in close collaboration with NR, undertook extensive stakeholder engagement with local authorities, train operators and lineside neighbours which resulted in the works being completed while minimal disruption to these stakeholders.

“The replacement of the structure will facilitate the removal of the existing speed restriction over the structure, improving journey times for passengers and adding robustness to the timetable while also facilitating any future redoubling of the line.”