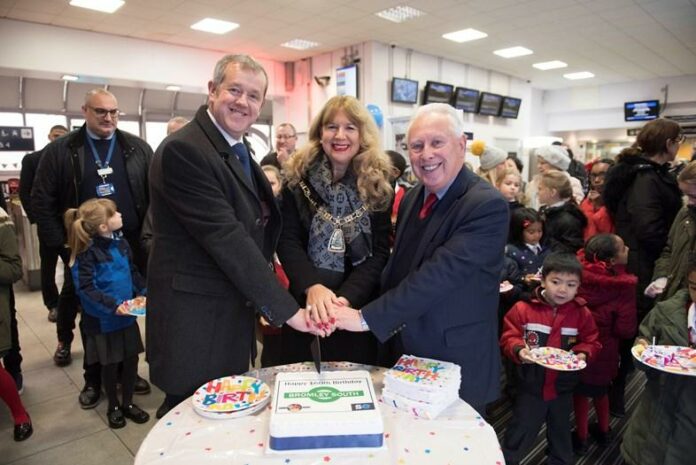 Passengers passing through Bromley South were treated to singing and poetry by local schoolchildren on Friday, as the station celebrated its 160th birthday, with cake and sweets being handed out and donations sought for local causes.

In attendance were the Mayor of Bromley, Cllr Kim Botting, the Bromley and Chislehurst MP Bob Neill, and the Bromley Lions, who were also collecting donations to help support vulnerable people in the local area.

As part of the celebration, the Mayor and Bob Neill MP judged an artwork competition by the children of St Mark’s School, who had created their own quirky pieces of art celebrating the 160 years of the railway and service it provides to the local community, and which was put on display for the travelling public.

When was first opened in 1858, Bromley Station was situated in a market town of around 20,000 people and originally consisted of a dual line. Following the opening of the station, new suburbs began to appear and in 1893 the line was quadrupled, with the present station site constructed over the bridge.

It took the name Bromley South in 1899 and continued to grow into the 20th century, with a station refurbishment taking place in the 1980s.

Today, just under 9 million journeys are made through Bromley South every year.

“It was great seeing the whole community turn up for this celebration and seeing everyone get stuck in with the day’s festivities. Bromley’s growth is testament to the benefits the railway brings to local community and business, providing vital transport links and employment opportunities.

“We are very grateful to the Mayor, Bob Neill MP, the Bromley Lions and of course the local schoolchildren from St Marks, whose enthusiasm and spirt are a credit to Bromley.”

The travel sector has the second worst reputation for customer service, new research has found. As part of its new Make Every Conversation Count report,...
Read more

As strike action resumes, a war of words has erupted, with both RMT and Transport Secretary Grant Shapps suggesting the other is causing unnecessary...
Read more