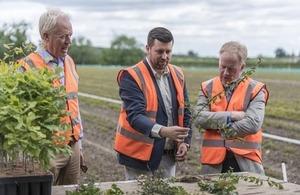 Lincolnshire business Crowder’s Nurseries is already benefiting from its contract with HS2 – Britain’s largest infrastructure project – to supply 7 million trees and shrubs which will create more than 650 hectares of new woodland between London and Birmingham along the HS2 Phase One route.

The family run SME was awarded the contract in 2016 and has already provided saplings and trees that have been planted along the line of route. HS2 is well advanced with the creation of a green corridor along the route of the new railway and, with 350,000 new trees already planted and 26 areas of new habitat created for wildlife.

The company employs 50 local people who are working on the HS2 contract – the largest contract in the company’s history. They are part of the 9,000 jobs that are now supported by the HS2 project. Crowder’s has also introduced a new apprenticeship programme, and have recruited 3 apprentices already this year.

Visiting Crowder’s Nurseries and seeing the saplings being grown, HS2 CEO Mark Thurston said: “The HS2 project is a once in a lifetime opportunity for businesses across the UK to get involved and help deliver Britain’s new high speed railway. Already some 2000 companies have worked with us, and the scale and longevity of the project means that there will be many more opportunities available for UK firms, particularly small and medium sized enterprises, to get on board.

“Crowders is helping HS2 deliver our vision for a ‘Green Corridor’, helping HS2 meet its target for biodiversity no net loss and be the most sustainable high speed railway of its kind in the world. We will plant 7 million trees, covering an area of 33 square kilometres, with more than 40 species of tree, including those native to each area the railway passes through.”

Managing Director of Crowder’s Nurseries, Robert Crowder said: “Since being awarded the contract to deliver the supply of plants to HS2, we have embarked on a “Journey of Excellence”, adopting new standards across our company which will benefit our company for years to come.

“I am proud that we have started an apprenticeship programme and recruited 3 apprentices so far this year. We have made considerable progress in the first 3 years of this contract and expect to improve further as the project scales up over the next 7 years to completion.”

The size of the HS2 project means that there will be thousands of opportunities within the HS2 supply chain, across many business sectors, requiring a wide range of capabilities, over a number of years that will be suitable for suppliers of all types and sizes. It is expected that every ten direct tier one major works contracts will result in over 10,000 indirect supply chain opportunities.

Last year, HS2 Ltd launched its Skills, Education and Employment Strategy, setting out interventions that will ensure that the UK not only has the skills to deliver the HS2 project, but to become a world leader in high speed rail. At peak construction, 30,000 jobs will be supported by the project, and 2,000 apprentices will be on offer.