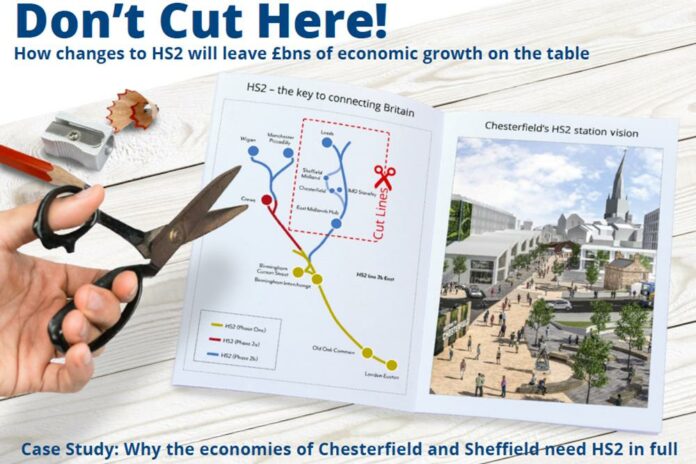 Don’t Cut Here! A Case study on Why the economies of Chesterfield and Sheffield need HS2 in full has been released today, urging the Government to deliver on its promise of developing HS2’s Eastern Leg to “regenerate, level up and make a real difference to people and communities” in Chesterfield and Derbyshire.

The case study has been released by Chesterfield Borough Council, in conjunction with Connecting Britain to highlight what it says are HS2 East’s “enormous opportunities for the UK economy that will drive growth, but which are currently at risk of being thwarted.”

It follows the NIC’s Rail Needs Assessment for the North and Midlands, which was published in December and included an option to leave out most of Line 2b East until 2050 and beyond, something which local authorities claim would have a “devastating” economic impact on the region.

Chesterfield Borough Council has referenced the Staveley Corridor regeneration, which is centred around a new HS2 Staveley Infrastructure Maintenance Depot (IMD) and promises a huge scope of opportunity for the area, with creation of jobs, infrastructure, housing and inward investment.

Opportunities for growth and regeneration include the £125m reopening of the Barrow Hill Line, a £100m link road, the development of 3,500 new homes and the creation of 2,200 new jobs around the area. But the IMD will only be required if HS2 East is delivered in full by 2040.

The document also covers the lasting legacy of HS2 in the eastern region, which would see one million people better connected by the line, 10,000s of cars taken off the roads and 1,000s of bi-modal trains replaced, supporting the government’s decarbonisation targets.

Much of HS2 East’s proposals are focused around masterplans which are already in place for the development of Chesterfield and Sheffield Stations, incorporating pedestrian friendly access and local public transport links.

Responding to the publication of the report last week, Councillor Tricia Gilby, Chesterfield Borough Council Leader, said she was ‘hugely disappointed’ that of the options presented the National Infrastructure Commission does not recommend delivery of the eastern leg of HS2 in full.

“This directly conflicts with the Government’s pledge to levelling up in areas like ours. It also seriously undermines local plans for growth in the North and the Midlands,” Cllr Gilby added.

Now Councillor Gilby joins other regional leaders in pushing forward the case for the Government to commit to the HS2 Eastern Leg in full – to realise the ‘once in a generation’ opportunity to shape the region’s future, and avoid land already earmarked for related development being left in limbo for years.

“After decades of underinvestment in strategic rail infrastructure, delivering HS2 is a once in a generation chance to transform connectivity, attract investment, create new jobs, build new homes, boost skills and opportunity and level-up communities across the North, Midlands and beyond. This is even more crucial to our economic future in optimising recovery from the pandemic, which has hit the North and Midlands hard.

“For Chesterfield, the failure to deliver the Eastern Leg in full means facing the prospect of reduced connectivity for our communities, as well as damaging the momentum we have built up around our ambitious comprehensive plans for both Staveley and the area around Chesterfield Station.

“In the Staveley area alone, planned growth worth at least £1bn has been catalysed by the planned HS2 maintenance depot. Taking this away would be a huge blow for an area that has had its hopes raised on the back of HS2’s plans and would leave a huge question mark over how we can deliver the ambitious growth plans our communities need and deserve.

“It is vital that the Eastern Leg of HS2 is delivered in full and that delivery starts as soon as possible. This is about more than just rail and trains – it’s about new jobs, new homes and new starts for communities that have been denied these opportunities over many years.

“This is a critical issue for Chesterfield and Staveley. I will not rest in working with council and business leaders along the planned Eastern Leg to hold Government to account and to ensure that the Prime Minister honours his commitment to deliver HS2 East in full. Time is of the essence to re-assert the strength of Chesterfield’s social and economic case ahead of Government’s planned publication of its Integrated Rail Plan.”

Scott Knowles, Chief Executive at East Midlands Chamber, said: “HS2 East is home to 13 million people, and about six million jobs, equating to 20% of the UK, larger than the economy of Denmark. Chesterfield shows how the investment does far more than just getting people to city centres. The importance of this opportunity to regenerate, level up and make a real difference to people and communities cannot be overstated and must not be missed.”

Click here to read Don’t Cut Here! A Case study on Why the economies of Chesterfield and Sheffield need HS2 in full online.

The Prime Minister was left with a depleted audience at the Conservative Party conference after today’s rail strikes saw an early exit yesterday for...
Read more
Infrastructure