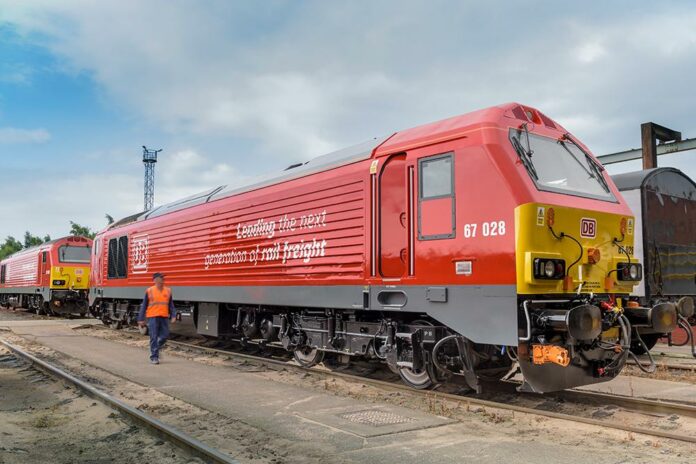 DB Cargo UK has successfully trialled the use of 100% renewable Hydro-treated Vegetable Oil (HVO) as it continues to look for new and innovative ways to power its fleet and decarbonise its operations.

Ground-breaking tests have been taking place at the company’s load bank facility at Toton Traction Maintenance Depot in Nottinghamshire where traditional red diesel has been substituted for the more environmentally-friendly HVO fuel.

A Class 67 diesel locomotive has been put through its paces-from idling to full power–with monitoring showing no adverse impact on the performance of the locomotive’s powerful 3,200bhp engine.

The company now plans to move to live, on-track testing of the HVO fuel in both its Class 67 and 66 freight fleet. Tests are also planned for the company’s fleet of Class 60 locomotives. HVO –Hydro-treated Vegetable Oil –is marketed as “one of the world’s purest and greenest fuels”.

It’s synthetically made through the hydro-treatment process from vegetable oils or animal fats which significantly reduces harmful carbon dioxide (CO2) and nitrogen oxide (NOx) emissions when used in diesel vehicles and machinery.

Chief Executive Andrea Rossi described the results as “extremely promising” with the potential to significantly reduce the company’s carbon footprint and reliance on fossil fuels.

He said: “As the UK’s largest provider of rail logistic solutions operating the largest fleet of locomotives, we have a responsibility to our customers and to society in general to continuously look for more sustainable ways of operating and minimise our impact on the environment.

“The Government has set the rail industry an incredibly stretching target to achieve net zero carbon emissions by 2050 and only through the greater electrification of the UK rail network and innovation like this will we meet this challenge.

“The results of our trial are very exciting and we have many more initiatives in the pipeline to further reduce our environmental impact.”

DB Cargo UK’s Head of Asset Management and Maintenance Steve Wilkinson said the company was collaborating with one of the UK’s leading suppliers of HVO fuel which already worked with high-profile brands like Caterpillar, John Deere, Volvo and Mercedes-Benz.

“We are very pleased with the initial performance of the HVO fuel which we could use instead of or alongside traditional red diesel.The fact it is compatible with our existing diesel means investment in new storage and fuelling facilities would also be kept to a minimum,” he added.

“On top of that, it performs well at low temperatures, has a longer lifespan and is biodegradable,” he added.

DB Cargo UK currently operates 228 diesel and electric locomotives that transport in the region of 37 million tonnes of freight each year across the UK and into Europe. It uses approximately 45 million litres of red diesel a year.