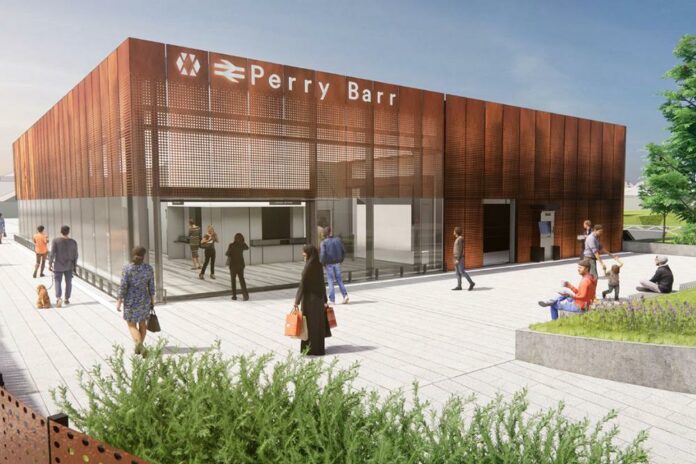 Updated plans for the redevelopment of Perry Bar railway station have been submitted to Birmingham City Council.

The design has been updated in response to feedback received from the public and stakeholders following submission of plans in September 2020.

The addition of more windows and perforated metal panels have added interest to the design, creating a visual landmark for Perry Barr both during the day and night.

In addition, proposals for landscaping the public areas surrounding the station have been amended to reflect the redesign.

The current station, which is regarded as one of the most outdated and unattractive in the region, is set to be replaced with a new, fully accessible, fit-for-purpose station including ticket office, toilets and baby change facilities, lifts and new stairs to the platforms.

Mayor of the West Midlands Andy Street said: “The key when drawing up the plans was to create a railway station that works for passengers with safety, clear information, lifts and toilets – features the current building lacks – a priority.

“But we received the message loud and clear that people expected more in terms of design for this key location and went back and looked at it again. We hope the revised design will create a station that the area and community can be proud of.”

As well as a full planning application for the railway station, outline planning permission is also being sought for the bus interchange in front of the neighbouring One Stop Shopping Centre.

Birmingham City Council is consulting on the new design, and a decision on the application is expected in January 2021.

The development will provide a high quality and accessible station with strong links to north Birmingham’s road, bus and cycle networks and is part of the wider £500 million regeneration of the Perry Barr area.

Malcolm Holmes, director of rail for TfWM, said: “We have listened to the feedback and taken that on board with this fresh design. This new station will not only be a vast improvement on what is there, but will link to the wider transport network with a new bus interchange next door, the Sprint rapid bus service along the A34 and A45, and the new safe cycle route from the city centre to Alexander Stadium.

“We are putting unprecedented investment in public transport – our railway, bus, tram and cycling networks – to change the way people move about the region and create a better connected West Midlands, while offering commuters more alternatives to the car to ease our traffic congestion and improve our environment.”

Contractor Galliford Try will be on site by the end of the year undertaking site surveys and the removal of some of the neighbouring structures.

Main construction is due to begin in spring 2021, subject to planning permission. Perry Barr station is set to reopen to passengers ahead of the Birmingham 2022 Commonwealth Games. The new station will provide a much-needed facility for residents of Perry Barr for many years to come.

Work has started on the construction of a new railway station on the Wolverhampton to Walsall line in the Black Country paving the way...
Read more
Maintenance

An appeal to restore a heritage railway station which has featured in Downton Abbey and scores of TV programmes and films is steaming ahead...
Read more
Infrastructure

Work to transform the arrival to York’s historic railway station has taken another step forward, as the council’s Executive agreed plans to progress the...
Read more
- Advertisement -

Leaders from across the North have written to the Secretary of State for Transport, Grant Shapps MP, to propose a way forward that they...
Read more

People travelling on public transport must wear face coverings for the duration of their journey from today or risk being fined, unless they are...
Read more