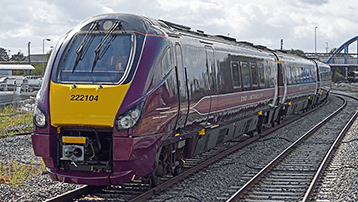 East Midlands Railway (EMR) is to reinstate weekday peak calls between Matlock and Nottingham in its December timetable change next month.

The changes, which will come into force on Sunday 11, December, will see 12 extra journeys – six each way – in the morning and evening peak between Nottingham and Matlock.

The extra services will operate in both directions, calling at all stations on the route, and as a result EMR will be reinstating hourly peak time services at Spondon and Attenborough.

Will Rogers, managing director for East Midlands Railway, said: “We understand the appetite for direct services between Matlock and Nottingham and appreciate how valuable they are for the communities and business on the route.

“That is why we are pleased to be able to offer this increase in services as part of our December timetable.”

Other changes in the timetable include the retiming of the 07:42 Newark Northgate – Lincoln service. It will now run five minutes earlier, and the 08:22 Lincoln – Peterborough – which will run 12 minutes earlier. These services have been changed to ​provide better opportunities for pupils travelling to schools on these routes.

The timetable also includes minor re-timings and removal of some non-standard calls on Liverpool – Norwich services West of Sheffield.  These changes are required to support the planned major industry timetable change in the Manchester area.

"The fine and the ban won’t make up for the costs of the disruption but they send a message to other drivers that it’s...
Read more
Government

Rail union RMT has rejected an offer from the Rail Delivery Group (RDG) and demanded a meeting today to resolve the ongoing dispute. In a...
Read more
Train Operating Companies