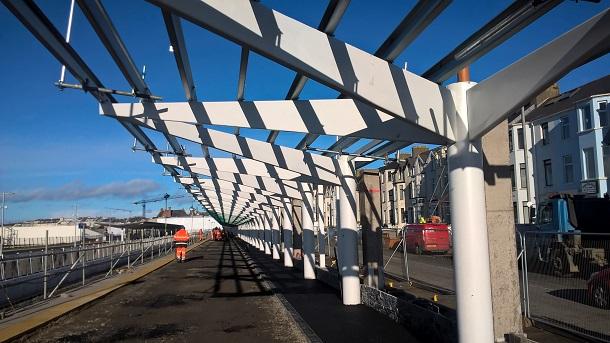 Portrush Train Station is entering the final phase of construction, with the new station on track to be completed in advance of The 148th Open in the town this summer.

The scheme represents an investment of approximately £5.6 million, with funding secured from the Department for Communities (£4.7m) and Department for Infrastructure (over £900k).

The new train station is one element of a wider £17m Portrush Regeneration Programme, led by the Department for Communities, which also includes a major public realm and revitalisation scheme for the town.

Work on the station is scheduled to conclude during the spring, well ahead of The 148th Open, Royal Portrush, which will take place this July.  This major sporting event offers a significant opportunity to sustainably develop the economy of Portrush town and the wider North Coast in a way that will bring substantial benefits to the area in terms of visitor numbers, spend and investment.

The new, modern, fully-accessible station will allow for further passenger growth at Portrush station, with over 620,000 journeys per year currently being made to and from the existing station.  It will also contribute positively to the ongoing regeneration in Portrush town centre and surrounding area.

As part of the project, Translink has sought the community’s help in designing the station – last summer, we encouraged people to vote on a number of gateway images to be erected along the boundary of the new station, facing Eglinton Street.

Over 250 people had their say on images intended to capture the essence of Portrush and the Causeway Coast, showcasing some synonymous events and sights including the North-West 200, the air show, coastal views, and of course, golf, helping to cement the station’s potential as a landmark.

These unique images are currently being manufactured and will arrive in Portrush shortly, helping to make the station a focal point and present a warm welcome to those arriving in the town.

John Glass, Translink’s Director of Infrastructure and Projects, said: ‘‘We are transforming public transport to be Your First Choice for Travel in Northern Ireland; this new fully accessible station will offer modern waiting facilities, improved passenger information and signage to local amenities and attractions as well as enhanced cycle storage to encourage active travel and ‘greener’ tourism links.

‘‘Portrush Train Station is one of our most important projects and we’re delighted with progress –  platform works are nearing completion, the encapsulation and scaffolding around the site has been removed, and we are on course to complete the project on schedule.  However, we are also keen to make the station warm and welcoming as Portrush’s gateway to the world.  The gateway images will add to a sense of belonging to the station, cementing its’ status at the heart of the town and emphasising the town’s links to the wider region.

We look forward to sharing the gateway images on Eglinton Street with the community in the next few weeks and playing our part in capturing the spirit of Portrush.  The display will add colour and vibrancy to Eglinton Street, one of the town’s main thoroughfares, and give visitors a real taste of what makes the world-famous Causeway Coast tick.’’