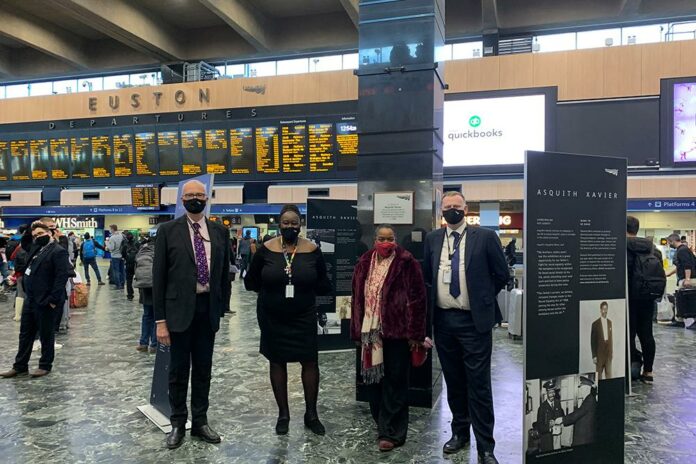 An exhibition has opened for passengers at London Euston explaining the fight of a pioneer for race equality who overturned a racist recruitment policy at the station in the 1960s.

Asquith Xavier was a guard with British Rail and was denied a promotion based on the colour of his skin in 1966.

Despite being the year after the 1965 Race Relations Act banning discrimination in public in Britain, the law did not cover workplaces.

With union backing, Asquith fought the policy in the courts, lobbied MPs and the government and on 15 July British Rail bowed to mounting pressure and scrapped its ‘whites only’ recruitment policy.

His success is now the focus of an exhibition on Euston Station’s concourse which was opened on Friday by his daughter Maria.

Network Rail has also produced an educational leaflet in partnership with Mr Xavier’s family in the hope his determined fight for racial equality can be taught in schools today.

The learning resources have been sent to 1,150 primary and secondary schools in Network Rail’s North West and Central region, which spans from Euston to the West Midlands, North West and Cumbria.

Some of the first children to learn about Asquith’s life using the new materials were from Netley Primary School who met his family at the opening of the exhibition.

Asquith’s daughter Maria, said: “My brothers, sisters and I see this exhibition as a great opportunity for our father’s fight for racial equality within the workplace to be recognised. He faced racial threats to his life, whilst attending court and work and had to have police protection during this time.

“Our father’s actions, we believe, initiated changes made to the Racial Equality Act of 1968, paving the way for other unsung heroes within the workplace and the UK.”

James Dean, Network Rail’s West Coast South route director, said: “Asquith Xavier is a name many children today will never have heard of, but this exhibition and education leaflet aims to change that. I’m immensely proud that we have been able to work with Asquith’s family to tell their story, simply to be treated fairly in the workplace, to the next generation.

“His determination and courage need to be known far and wide because even though this happened 55 years ago, our society still has some way to go to ensure everyone is treated the same regardless of their ethnicity, religion, sexual orientation or gender.”

Loraine Martins, director of diversity and inclusion for Network Rail, said: “It’s extremely poignant that this exhibition is here at Euston. This is where Asquith Xavier became the first black train guard by challenging a colour bar, which was British Rail policy at the time.  Asquith Xavier did this in the face of great adversity and threats to his life.

“Network Rail is fully committed to being a company where each individual is valued, respected and encouraged to reach their full potential. In keeping with his memory, we’re working hard to ensure our workforce better represents our customers and society as a whole. We will continue to make the best use of our people’s talent and capabilities to provide real opportunities for their professional development.”

The exhibition about Asquith Xavier’s achievements, part of Network Rail’s 2020 Black History Month programme of events, will be on display at Euston station for the next six months.

A link to download the education pack can be found here: https://www.networkrail.co.uk/stories/black-history-month-exhibition-honours-asquith-xavier-at-london-euston/

Asquith Xavier is a local hero at Euston station after his strength and determination overturned a whites-only recruitment policy in 1966.

Asquith moved to England from the Caribbean island of Dominica in 1956. He was part of the Windrush generation of West Indian people who moved to Britain after World War II.

The Windrush generation made an enormous contribution to rebuilding our country and public services following World War 2, as well as enriching Britain’s social, economic, cultural and religious life.

Asquith’s first job for British Railways in 1956 was as a porter and he later became a rail guard at Marylebone station. The closure of the Marylebone main line meant guards were to be transferred to other London stations.

Denied promotion because of the colour of his skin

Asquith later applied for a promotion at Euston, where guards were paid an extra £10 a week.

Asquith received a letter saying his application was rejected – despite being well qualified for the job – because of the colour of his skin.

At the time, Euston was operating a whites-only recruitment policy. This policy was agreed in the 1950s and enforced by the local unions and station management to ban anyone who wasn’t white from working in jobs that involved contact with the public.

The Race Relations Act 1965, which banned racial discrimination in public in Britain, did not cover workplaces and so could not be used. However, he received the backing of a union official who wrote to the head of the National Union of Railwaymen on his behalf and two MPs wrote to the Secretary of State for Transport, which was Barbara Castle at the time.

Asquith’s hard work and determination meant his story soon made its way to parliament and, on 15 July 1966, British Rail scrapped the policy.

He was then offered the job at Euston and had pay backdated to May that year when his application was originally rejected.

Throughout his campaign, Asquith received death threats and hate mail. After starting at Euston in August 1966, he also faced racist abuse and at times had a police guard.

Asquith sadly died in 1980, at the age of just 59, leaving behind seven children.

A plaque was unveiled on the main concourse at London Euston ahead of Black History Month in October 2016 – 50 years after the whites-only recruitment policy was scrapped. Another was unveiled at his local station of Chatham, Kent on 24 September 2020.

Carrying on his legacy

Asquith’s family continue to campaign in the UK to ensure Asquith’s story is included in the British curriculum.

Asquith’s daughter Maria, said: “My brothers, sisters and I see this exhibition as a great opportunity for our father’s fight for racial equality within the workplace to be recognised. He faced racial threats to his life, whilst attending court and work and had to have police protection during this time.

Our father’s actions, we believe, initiated changes made to the Racial Equality Act of 1968, paving the way for other unsung heroes within the workplace and the UK.”

Please download a leaflet which can be printed explaining Asquith’s story here: will be on Euston page

More to be done

Network Rail continues to promote diversity and inclusion through its ‘Everyone Matters’ strategy – ensuring that Network Rail is a more open, diverse, and inclusive organisation that better reflects the diversity of the communities it serves.

Network Rail published its first ethnicity pay gap report this year as part of its project to improve the recruitment and promotion of people from Black Asian and Minority Ethnic (BAME) backgrounds.

Find out more about diversity and inclusion at Network Rail: www.networkrail.co.uk/diversity

A plaque in honour of Asquith Xavier, the pioneer for black equality who successfully broke the racist ‘colour bar’ at Euston station over 50 years ago, was unveiled in Chatham in Medway, on Thursday 24th September.

Asquith Xavier who was a Chatham resident and a guard with British Rail, played a key role in ending the colour bar which prevented black people from working in public facing roles.

Asquith successfully campaigned to end the racial discrimination practiced by British Rail which helped to bring in the 1968 Race Relations Act, making it illegal to refuse housing, ­employment or public services to ­people because of their ethnicity.

The railway and footbridge across Barmouth Viaduct will reopen on Saturday 10 December, as Network Rail prepares for final metallic upgrades in 2023.  Network Rail...
Read more
Passenger

TransPennine Express (TPE) has become one of the first train operators in the North to install British Sign Language (BSL) message boards. The screens, which...
Read more