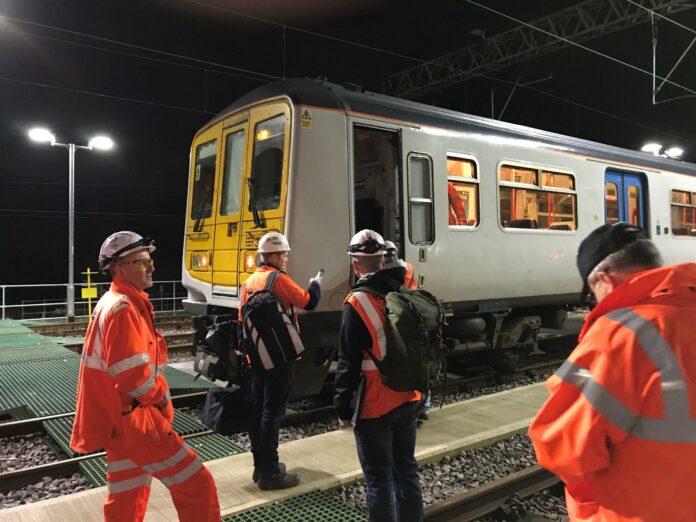 A test train along the newly electrified railway between Manchester and Preston made its final journey overnight to complete checks for the arrival of 100mph services in May.

In the early hours of this morning (22 February), the last electric high-speed train ran on the newly upgraded route which will soon see faster and more frequent trains for passengers thanks to the multi-billion-pound Great North Rail Project.

Network Rail engineers made their final high-speed inspections to the track and new overhead lines in the early hours of this morning while on-board the test train from Preston to Manchester Victoria.

Electric trains can currently travel up to 75mph along the line, but once testing is complete the speed limit will rise to 100mph.

Mark Ashton, sponsor for Network Rail, said: “Following the successful introduction of electric passenger trains on the Manchester to Preston railway last week, last night we completed our last test as part of the project to allow trains to run up to 100mph.

“High speed testing of the overhead wires will support the introduction of greener, faster and more frequent trains – a key aim of the Great North Rail Project to help transform rail travel across the North.

“I would like to thank local people for their patience while we have completed this transformational upgrade.”

The results of the tests will be thoroughly checked before being verified by the Office of Rail and Road, after which 100mph services can run on the route when new timetables come into effect in May.

A new trial to improve biodiversity will soon start on the West Highland Line between Craigendoran and Helensburgh Upper. As part of the project, trees...
Read more
Network Rail

Network Rail has revealed plans for a new Assisted Travel Lounge for Manchester Piccadilly station. The area is to be used to provide assistance for...
Read more
Infrastructure

The GWR sleeper service between London Paddington and Penzance will not be able to operate from Monday to Thursday evenings because of essential work,...
Read more
- Advertisement -