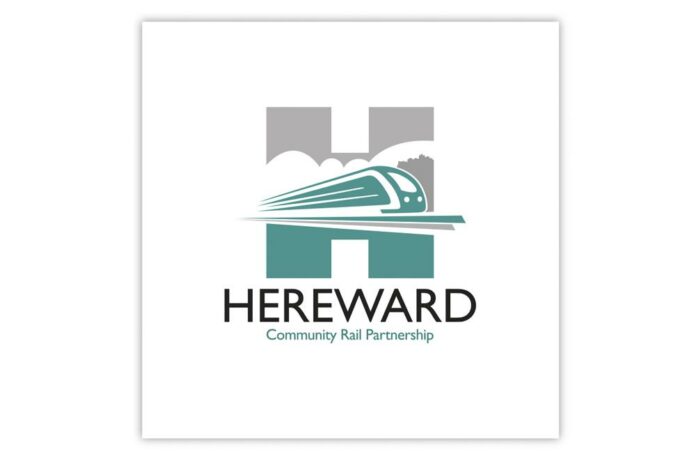 It is full steam ahead for the future of community rail in Fenland after a community partnership was officially relaunched with a new logo and brand identity.

The Hereward Community Rail Partnership (CRP), whose aim it is to bring communities together to improve and promote the local Hereward railway line, began a new chapter following a special relaunch event on Wednesday, February 6.

Partners then travelled along the Hereward Line to Leicester, Cambridge, Ipswich and Norwich to share CRP information and their ideas for future development with passengers.

The logo and rebranding project comes almost seven years after the launch of the Hereward CRP and has been funded by CrossCountry’s Community Engagement Fund.

March-based graphic design firm, Fine Designs Ltd, was commissioned to create three logo designs and members of the public voted for their favourite via an online poll late last year.

Councillor David Oliver, Fenland District Council’s Portfolio Holder for Transport, said: “These are really exciting times with ongoing investment in our Hereward Line stations at March, Manea and Whittlesey, so it’s great to have a new logo and brand identity for the Hereward Community Rail Partnership.

“The new logo and marketing materials will help us become more identifiable with our customers and support the work we are doing to promote rail travel in the Fens.”

Richard Gibson, CrossCountry’s Head of Communications, said: “We were delighted to help with the relaunch of the Hereward partnership. A strong identity is important for any organisation wanting to be remembered by its customers, and this new logo will make it easier for everyone to recognise the benefits being delivered for rail users across Fenland.”

Ruaridh Shand, Service Delivery Manager at East Midlands Trains, said: “The Hereward CRP relaunch was a great day and an event enjoyed by all who attended. It was fantastic to see how the hard work those involved had put in had culminated in a new logo that really represented the objectives of the partnership; to inspire the local community to take full advantage of the fast transport network on their doorstep and for those outside the area to realise the accessibility of Fenland as a natural beauty spot.”

Alan Neville, Greater Anglia’s Customer Engagement Manager, said: “We are very pleased to continue working with Hereward Community Rail Partnership. It’s great that the local community has been involved in choosing the new logo for the relaunch of the partnership. We hope they’ll also be encouraged to travel along this line and explore more of the Fens by rail.”

Ibbie Omideyi, Community Engagement Manager at London North Eastern Railway (LNER), added: “It is great to see how many partners the Hereward CRP is working with and LNER is excited to be one of them.”

The outgoing CEO of Eurostar, Jacques Damas has laid bare the impact of Covid-19 and Brexit on the cross-Channel operator in a letter to...
Read more
Government

Responding to the Labour Party reconfirming its commitment to public ownership of the railway, Andy Bagnall, chief executive of Rail Partners, said: “It’s not...
Read more