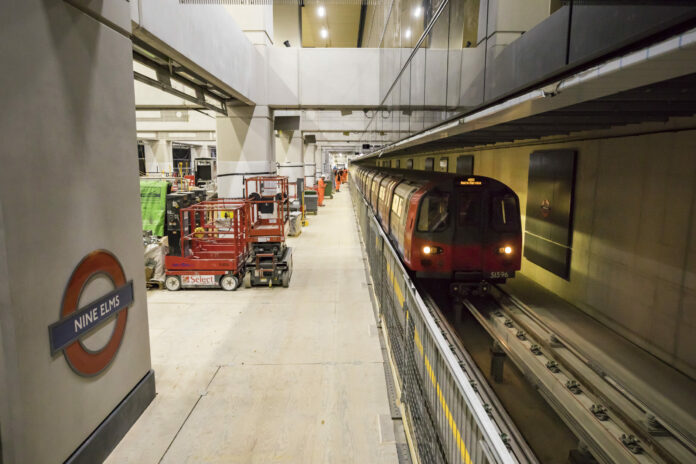 The Northern Line Extension passed a major milestone at Christmas after test passenger trains successfully completed the journey through the new tunnels from Kennington to Battersea Power Station.

The Northern line passenger trains entered the new 3.2km tunnels at Kennington, travelling through the newly constructed step-plate junction that connects the existing Northern line tunnels to the extension.

The trains then continued to Nine Elms Tube station before arriving at the extension’s second new station at Battersea Power Station. They then turned around using the new crossover junction to complete the journey back to Kennington.

These first test journeys mark the completion of a number of complex milestones in 2020 which include:

Work to finish the extension, which remains scheduled for completion in autumn this year, is now focused on completing necessary signalling software upgrades and the fit-out of the two new stations which will be the first to be added to the Northern line since the extension to Morden in 1926.

Heidi Alexander, Deputy Mayor for Transport, said: “I’m delighted that the Northern Line Extension has reached this major milestone, with the project on track to welcome its first passengers in the autumn. Last year was one of the hardest in TfL’s history so it’s great to start 2021 on a positive footing, not least because the extension will support thousands of new jobs and homes for our city.”

Stuart Harvey, TfL’s Director of Major Projects, said: “Seeing a Northern line train travelling through the extension for the first time is a really significant milestone and demonstrates the commitment of our brilliant team who have been working so hard during such a challenging year.  The Northern Line Extension continues to support jobs, homes and growth in this exciting riverside destination and has created employment through the supply chain across the UK. We are now focused on making sure the signalling software and systems are ready along with completing the final stages of fit-out of the two new stations before the planned opening of the extension in the autumn.”

The Northern Line Extension is the first major Tube line extension since the Jubilee line in the late 1990s. The extension will connect Kennington to Battersea Power Station, via Nine Elms, bringing Battersea and surrounding areas to within 15 minutes of the City and West End.

Haxby station progress to be discussed this week

Senior councillors in York will receive an update on progress to bring a railway station back to Haxby for the first time in nearly...
Read more
Infrastructure

Network Rail has announced that a section of the line between Inverness and Aberdeen will be closed for eleven days to enable work on...
Read more
Infrastructure

Multi-million-pound rail investment at the Port of Southampton