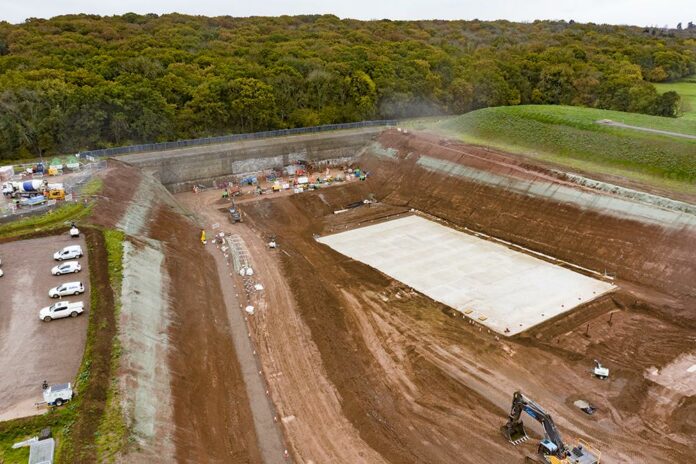 HS2 has revealed the first images of one its largest construction sites in the Midlands, which is being prepared for the launch of a tunnel boring machine (TBM). The TBM will dig under Long Itchington Wood, creating a 1 mile twin bore tunnel, before the route heads North and swings into Birmingham’s Curzon Street Station.

This key site on the Midlands section of the HS2 route is managed by the BBV Joint Venture (Balfour Beatty Group and VINCI Construction), who will be one of the biggest recruiters in the Midlands over the next two years, expecting to recruit 7,000 jobs to support the delivery of its HS2 programme of work.

There are currently 60 workers on site including student engineers and apprentices. BBV is also one of the first companies in the country to be supporting the delivery of the new T-Level Construction qualification. Twenty students from Walsall College will complete their 45-day industry placement with BBV working on the delivery of HS2.

Current work on the 1km sq site entails a large and deep excavation, with 250,000m3 of material being excavated in layers before being transported and deposited locally to form environmental embankments for the main line.

The 2,000 tonne tunnel boring machine, which has been manufactured in Germany by Herrenknecht, is due for delivery on site in early 2021, will be launched in Summer 2021 and completion of the boring will be mid 2022. The tunnel will be around 9-10 metres in diameter.

On this stretch of the route there are two tunnels being built by BBV – the other one is Bromford Tunnel. There are also 100 bridges, 35 viaducts, 36 cuttings and 70 bridge structures on this part of the route.

HS2 Minister Andrew Stephenson said: “It’s exciting to see construction of HS2 underway. These works will not only deliver a world class high-speed railway improving connectivity across the Midlands and beyond, but will have a lasting impact on jobs, skills and businesses here in the UK as part of the government’s Plan for Jobs.

“The BBV joint venture will be one of the biggest recruiters in the region over the next two years, as the construction of HS2 Phase 1 creates 7,000 jobs across the Midlands. That underlines how vital HS2 is to levelling up prosperity and opportunity across the country, as we build back better from this pandemic.”

David Bennett, HS2’s Delivery Director said: “The Long Itchington Wood Tunnel north portal site is a key site on the Midlands section of the HS2 route, and it’s great to see work progressing well in preparation for the arrival of the tunnel boring machine next year.

“The tunnel in this location goes under Long Itchington Wood specifically to preserve a section of ancient woodland. This forms a key element in how we are managing environmental impacts through the design of the railway. Along with 32 miles of tunnel, HS2 will also be criss-crossed by over 150 bridges and underpasses on Phase One, including 16 specially designed ‘green bridges’ covered in planting, and a green corridor alongside the route will integrate HS2 into the landscape.”

Michael Dyke, Managing Director of Balfour Beatty VINCI said: “In readiness for the arrival of the first tunnel boring machine, works have already commenced in earnest to prepare the Long Itchington Wood Tunnel north portal site, with our expert team and valued supply chain partners excavating 250,000m3 of material before reusing it elsewhere across the route.

“Critical to the successful delivery of Europe’s largest infrastructure project – HS2, the 2,000 tonne tunnel boring machine will set off on its journey from the portal next Summer, travelling from North to South to create the twin bore Long Itchington Wood Tunnel.”

The TBM will take around 5 months to complete the first bore of the twin bore tunnel. Once the first bore is complete, the TBM will be extracted at the South Portal reception box before being transported by road back to the North Portal to commence the second bore. A large portion of the TBM support modules will be drawn back through the bored tunnel before being positioned on the cradle for the second bore.

Works on a Green Tunnel located south of the South Portal will commence later this year using the D-Wall rigs mobilised for the reception box. Excavation of the reception box will be undertaken in this period with the material being stockpiled locally.

There are a number of supply chain companies working on the site including Collins Earthworks who are undertaking bulk earthmoving. Collins, based in Derbyshire, has around 120 employees working on HS2 sites in the Midlands.

HS2 has continued to play a vital role in the UK Government’s Plan for Jobs to protect, support and create employment, which has helped millions of people to continue to provide for their families over the past eight months of the COVID-19 crisis.

Further supply chain companies working on the site include:

At the peak of construction on the whole of Phase One, ten tunnel boring machines – each a self-contained underground factory – will work 24 hours a day, 7 days a week. Weighing up to 2,200 tonnes, each 160m long machine will bore and line the tunnels as they drive forward at speeds of up to 15 metres per day.

New station at Cosham progresses to next stage

Cosham residents are keeping their fingers crossed after plans for a new £15 million railway station for the town have been submitted by the...
Read more
HS2

Funding secured for next stage of Lichfield Canal restoration

HS2’s Community & Environment Fund has provided a £75,000 grant to restore the Darnford Moors section of the canal, transforming the area into a...
Read more