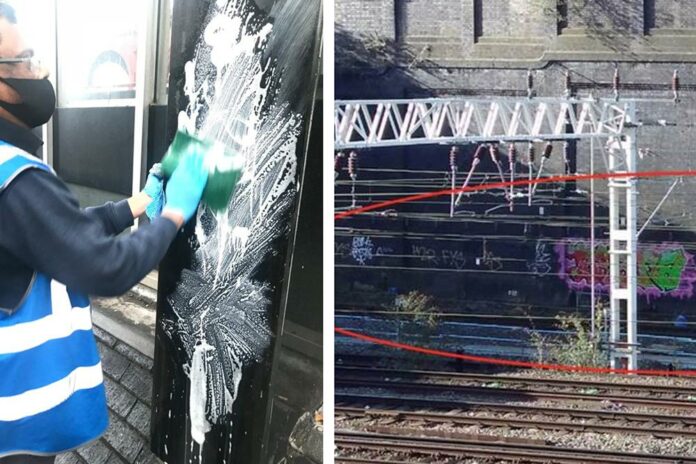 Unsightly graffiti around London Euston is being removed as part of Network Rail and HS2’s war on railway vandalism.

Over the next few weeks teams will be getting rid of graffiti in Camden, including on Mornington Crescent and Harlesden Bridge.

The clean-up supports Transport Secretary Grant Shapps’ ongoing commitment to improve the railway for passengers and residents who live beside it.

James Dean, route director for West Coast South, said: “Graffiti makes the place look messy for neighbours and passengers. We want the railway to be a clean, welcoming environment for people who travel on it and live and work near it. That’s why we’re declaring a war on graffiti.

“There’s a safety aspect here too. Graffiti vandals risk their lives trespassing on the railway. Trains leave Euston every three minutes powered by overhead wires carrying 25,000 volts of electricity. It’s a seriously dangerous place to be. Our advice is to always stay off the tracks.”

Mark Recce, head of delivery unit for Euston On Network Works, HS2 Ltd, said: “We are happy to be supporting Network Rail in their efforts to remove rail side graffiti around our worksite in Euston to improve the area for passengers. HS2 is committed to creating a clean, reliable and safe rail network, not only for passengers in the future, but also those who use it now.”

Chris Heaton-Harris MP, Rail minister, said: “We’ve been clear that the blight of graffiti on our railways must be tackled, and I am delighted to see Network Rail are focused on dealing with the problem.

“As we build back better removing graffiti across London will improve our railway and make stations and services more pleasant for passengers.”

The railway at Euston is one of the busiest in Europe and graffiti can only be cleaned up when trains aren’t running.

Trespassing on the railway and committing acts of vandalism with graffiti is a crime. Incidents of graffiti can be reported to Network Rail’s 24-hour national helpline on 03457 11 41 41.

Firefighters have been dealing with a major warehouse fire next to railway lines in Wolverhampton. For safety Network Rail was forced to close the tracks...
Read more
Maintenance

Rail industry to help break silence with Samaritans this Christmas