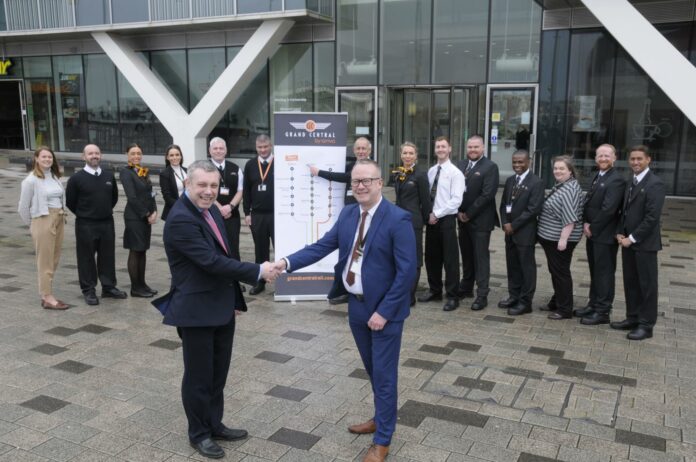 Grand Central has announced it has signed a lease with Blackpool Council and work has now started on the 2,500sq ft site at No. 1 Bickerstaffe Square. The space will be Grand Central’s flagship train crew hub to service its new North West to London Euston route.

The ground floor unit, next to Blackpool North railway station, will house 50 Grand Central staff and is part of the 1.1 million sq ft mixed-use flagship Talbot Gateway regeneration development. The first batch of new recruits for the rail operator has already begun training in a temporary space at Bickerstaffe Square.

The train crew hub, which has been leased until 2026, will be the base for Grand Central employees – including train drivers, senior conductors, customer services assistants and management.

When it opens next month, facilities will include office space, a training room, briefing room, quiet room, booking on point, kitchen, toilets and breakout area.

There will also be an internal garden with outdoor seating for staff to use and the building also boasts a communal bike park allowing employees to cycle to work, a drying room and shower facilities.

A number of car parking spaces have also been leased from the Talbot Road car park directly opposite the depot for the use of staff.

Garry Clark, depot manager for Grand Central, said: “Bickerstaffe Square is a fantastic space and it’s really exciting to see our staff facilities taking shape. We can’t wait to move into our new home and it’s brilliant to know that we are playing a part in regenerating the area around the railway station and Talbot Road.

“We have a track record of supporting local communities in and around our network and we believe the launch of our new route from the North West to London Euston in 2020 will prove to be a major boost to the local economy.”

Cllr Mark Smith, Blackpool Council’s Cabinet Member for Business, Enterprise and Job Creation, said: “We are delighted to welcome Grand Central Rail to Bickerstaffe and wish the team every success in their new hub.

“The Talbot Gateway project represents a wonderful opportunity for businesses to develop and thrive in Blackpool town centre. The new unit, along with Grand Central’s upcoming route from Blackpool North to London Euston, will provide a great boost to the local infrastructure.”

In a move which is expected to bring significant economic benefits to the North West – including a boost to tourism, Grand Central announced a new route from Blackpool North to London Euston last June.

From later in 2020, Grand Central will operate up to five new direct train services to run every day of the week between Blackpool North and London Euston. Blackpool will gain direct services to London on Sundays, as well as later trains to and from the capital Monday to Saturday.

Poulton-le-Fylde and Kirkham & Wesham will each have new direct London services throughout the day, seven days a week. All trains will also call at Preston and Nuneaton, with most also stopping additionally at Milton Keynes, connecting leisure and business travellers to the capital and offering a choice of operator and great value fares.

Grand Central is in the final stages of recruiting the onboard staff it needs for its Blackpool train crew hub, including drivers and customer service advisors. For more information and to apply visit www.grandcentralrail.com/careers

RAIB report: Wrong side signalling failure and derailment at Dalwhinnie, Badenoch and Strathspey

RAIB has released its report into a wrong side signalling failure and derailment at Dalwhinnie, Badenoch and Strathspey that happened on 10 April 2021. At...
Read more