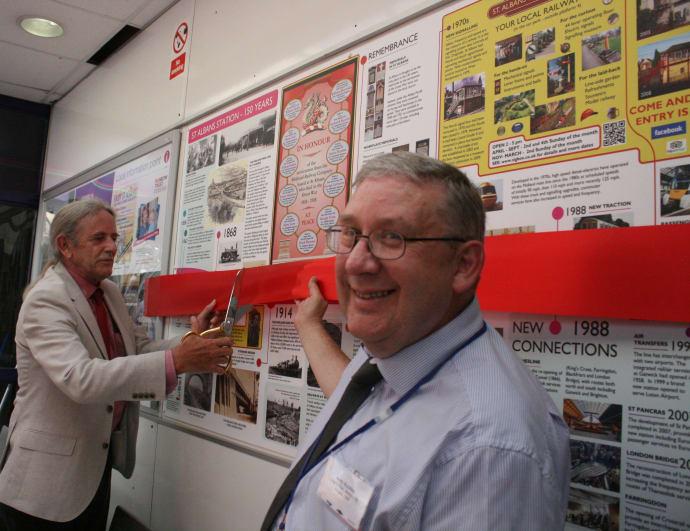 The panel, which takes pride of place in the waiting room on platform 1, charts the history of the station, which opened in 1868, and focuses on the railway workers who paid the ultimate sacrifice during World War One, listing their names, ranks and regiments.

The display was developed over the last six months by members of the St Albans Signal Box Trust and the recently formed Bedford to St Albans Community Rail Partnership (CRP).

CRP Line Officer Andy Buckley said: “I’m really grateful to the members of the Signal Box Trust, who have done a splendid job researching the information for the history panel. Special thanks must go to Les O’Leary who did the design work on the panel. I’m very pleased that Thameslink has been able to support this project with a prominent position at the station. It’s important to remember the sacrifice and the history that goes with both the railway and the community it serves.”

Following a ribbon cutting on Wednesday (24 July) to unveil the panel at the station, an act of remembrance took place at the signal box with St Albans Mayor Janet Smith reading the names of the fallen. The Last Post was sounded and a silence was observed before wreaths were laid in front of a smaller panel dedicated to the fallen.

Cllr Smith said: “It was a great honour to be invited to the unveiling of the new history panel at St Albans City station, especially as it pays tribute to the railway staff who lost their lives in the First World War.To read out the names of those lost was very moving indeed.”

Richard Kirk, who is a trustee of St Albans Signal Box Trust, said: “The Trust is pleased and honoured that our history panel has been put on display at the station for all to see, especially as we have been able to incorporate a copy of our World War One memorial as well as publicising the restoration and public openings of the signal box.”

Thameslink and Great Northern Managing Director Tom Moran said: “We are proud to celebrate St Albans City station’s long history. The trustees and CRP have worked hard to produce a well-researched timeline of the station’s history, paying tribute to those who paid the ultimate sacrifice during the Great War.”

On the same day, the Signal Box Trust also signed up to become a station partner with the CRP, which encourages people to become involved in their local railway. CRPs are being set up across the Govia Thameslink Railway network with the aim of getting people involved in maintaining floral displays, creating community art schemes and helping run special on-train activities or community or school visits to stations.

Mr Kirk said: “We are also delighted to become the first Station Adopters at St Albans City and look forward to working with both Thameslink and ACoRP [umbrella organisation for rail partnerships] to further the partnership.”

A Northern engineer is celebrating half a century of working in the rail industry.   Craig Neild joined British Rail as an apprentice in 1971, working at Longsight Electric depot as he was living in Wythenshawe at the...
Read more
Government