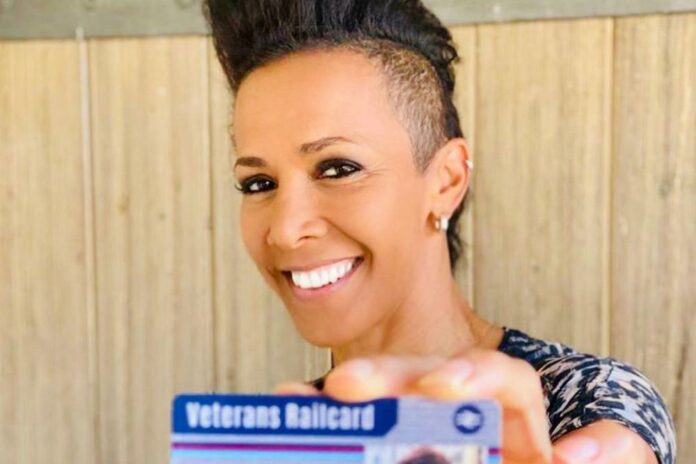 Double Olympic gold medallist and armed forces veteran, Honorary Colonel Dame Kelly Holmes, has teamed up with Sophie Faldo, former Army officer and winner of the Great British Bake Off, to support the launch of the new Veterans Railcard which is one of a number of measures designed to help veterans adjust to life outside the military.

Service personnel often live and work all over the UK, moving regularly from posting to posting, so when they leave the armed forces they may well find themselves hundreds of miles from family and friends. The new Veterans Railcard, which is for anyone who has served at least one day in the armed forces or Merchant Marines who have seen duty on legally defined military operations, will save veterans 1/3 off most rail fares to help reconnect them to loved ones and connect them to new training and work opportunities.

This new Railcard will help an extra 830,000 people benefit from discounted rail travel. It is just one of a number of measures being implemented by the government as part of its commitment to make the UK the best place to be a veteran anywhere in the world. The Railcard’s design even pays tribute to those who have made sacrifices to protect and serve our country, by utilising the colours featured on the Veterans flag which represent the three-armed forces: Army, Navy and Airforce.

The new Veterans Railcard will be available for a special introductory price of just £21 for a 1-year Railcard or £61 for a 3-year Railcard, until 31st March 2021. It will offer the Railcard holder and their companion 1/3 off most rail fares and 60% off for up to four children aged 5-15 years.

Customers will be able to choose from a physical card that they can carry in their wallet or as a digital version they can keep on their phone.

The Veterans Railcard will be available for use on journeys from 5th November. Anyone who travels by train will be able to do so with confidence due to the extra steps the rail industry has taken to make journeys safer. From cleaning trains and stations more frequently and running more services to help with social distancing to improving information with people and technology helping every step of the way.

Robert Nisbet, Director Nations and Regions at Rail Delivery Group said: “Britain’s train companies are proud to support those that have served in the UK Armed forces and their families by offering a third off rail fares with the new Veterans Railcard which is now on sale. We’re delighted to have worked with the DfT, on behalf of the rail industry, to help make rail travel even cheaper for veterans and in doing so, connect them to job opportunities and training, as well as to their family and friends.”

A Shropshire village has had a major safety boost with the installation of a Network Rail designed eye-catching ‘FLOW’ bridge - a low carbon,...
Read more
Passenger

Transport for Wales (TfW) has launched a new on-train WiFi portal, developed by GoMedia, which features real time information and opportunity for passengers to...
Read more