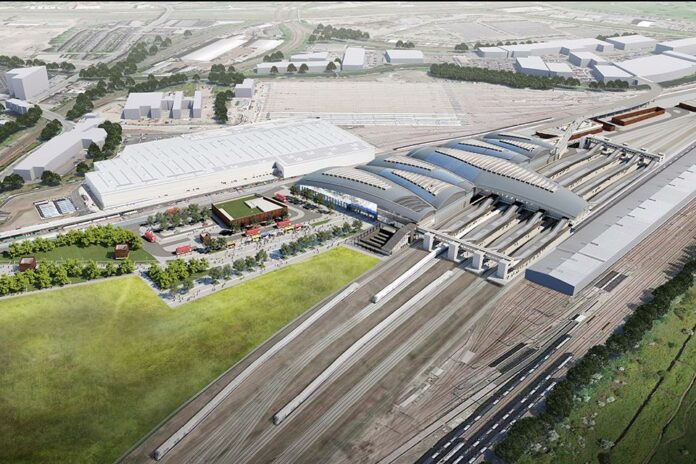 The new high speed station will help kick-start the UK’s largest regeneration project, which aims to transform the former railway and industrial area, into a new neighbourhood supporting up to 65,000 jobs and 25,500 new homes.

The high-speed platforms will be situated underground with an integrated connection to the adjoining conventional station at ground level via a stylish shared overbridge providing seamless connections between HS2 and Elizabeth line (Crossrail) trains, to Heathrow and central London. The current station design also includes the potential for provision of future services to Wales and the west of England from Old Oak Common.

A light and airy concourse will link both halves of the station with a soaring roof inspired by the site’s industrial heritage. Designed by a team led by WSP and architects, WilkinsonEyre, the station is set to be the UK’s best connected rail interchange, with an estimated 250,000 people passing through every day. 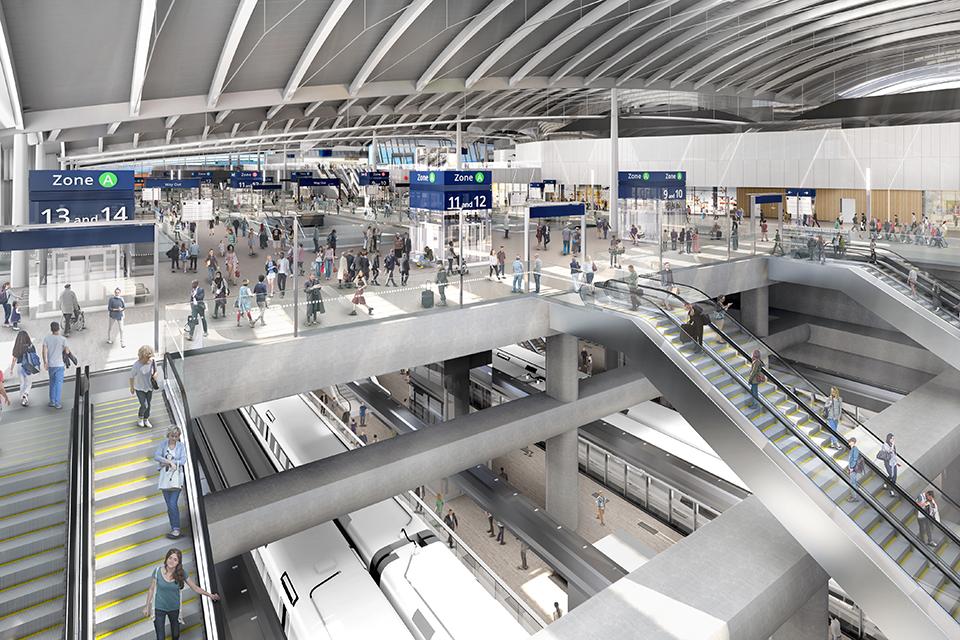 Escalators will take passengers down to the HS2 platforms, with a new public park built above them. The green space, which could include broad-leafed trees and water features, and outdoor event spaces, will welcome visitors to Old Oak Common and provide a new focal point for the growing community.

The long-term planning and development of the wider site is being led by the Mayor’s Old Oak and Park Royal Development Corporation which is planning a mixed-use development, with commercial, residential and leisure uses.

The arrival of HS2 has the potential to transform Old Oak Common, unlocking thousands of new jobs and homes around the UK’s best connected transport hub. Linking HS2 and Crossrail, our new station will be a landmark piece of architecture at the heart of the development, designed around the passenger to ensure seamless, accessible and stress-free travel.

We want the community to be a part of the design process and we are asking for their views on the latest plans.

HS2 will be the backbone of Britain’s rail network, unlocking regeneration and economic growth across the country, while improving journeys for passengers.

These designs show how Old Oak Common will set world-class standards for the future of stations. The task for our designers and engineers now is to take these ideas from the drawing board to reality, building an iconic station that is accessible, safe and open to all.

The launch of the HS2 station designs at Old Oak today is an exciting step forward for the Mayor of London’s Old Oak and Park Royal Development Corporation (OPDC). In line with Mayoral policy we will be using the opportunity offered by the HS2 station, which we are now beginning to see take real shape, to create a vibrant new quarter of London that will bring jobs, housing and a whole new social infrastructure, for the benefit of both local people and also those that will want to move into this area. 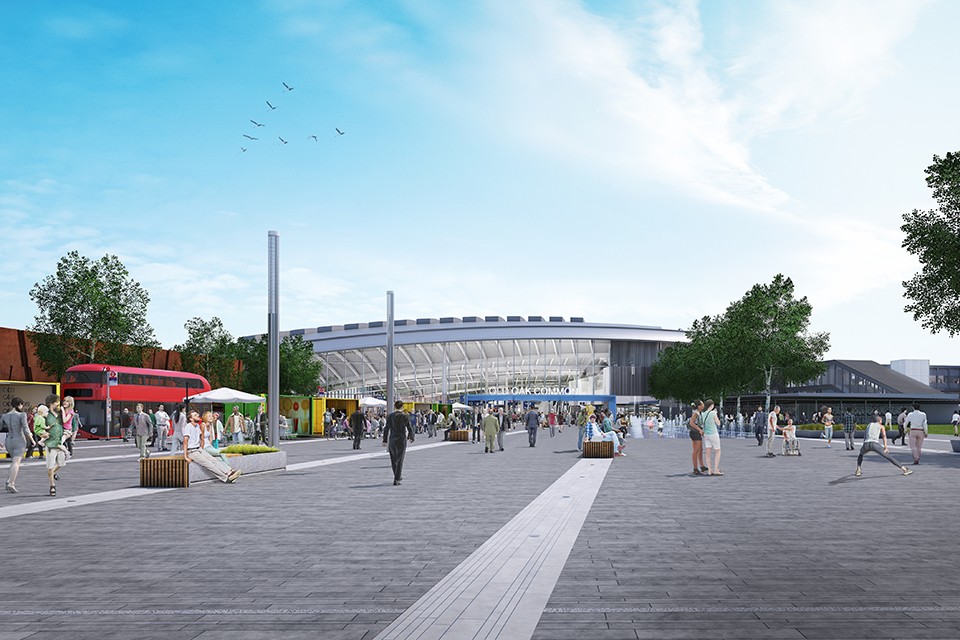 As well as being a catalyst for regeneration within the wider OPDC area, the new HS2 Old Oak Common station will become a landmark destination featuring an area of urban realm to the west of London. Our design responds to the station’s function, recognising that more than half of those using the station will interchange between the below ground HS2 and the Elizabeth Line. The station form takes inspiration from our Victorian railway heritage and the juxtaposition between the above and below ground railways.

WSP has welcomed 21 new apprentices to the Old Oak Common station project, as part of our 240-strong project team. We are committed to boosting the skills of Britain’s next generation while delivering this transformative project.

The station will be built on the former Great Western railway depot at Old Oak Common. HS2 is currently working to clear the site and prepare the ground for the start of construction, later this year.

The 6, 450 metre HS2 platforms will be built in a 1 kilometre long underground box, with twin tunnels taking high speed trains east to the terminus at Euston and west to the outskirts of London. Material excavated during work on the tunnels will be removed by rail from the nearby former Willesden Euroterminal depot.

The community have been invited to comment on the designs, which are on display today (5th February) at the Collective, Nash House on Old Oak Common lane and other local venues of the coming month.

Railway industry message to Transport Secretary ahead of speech on Tuesday

On the eve of Transport Secretary Anne-Marie Trevelyan’s speech at the Conservative Party conference in Birmingham, the Railway Industry Association (RIA) has called on...
Read more
HS2