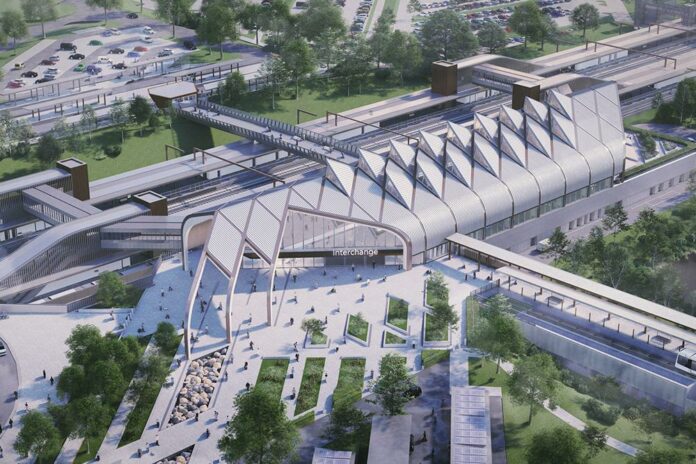 HS2’s new landmark station, set to be built in Solihull, has been approved by Solihull Metropolitan Borough Council.

The planning application for the station and the surrounding landscape and public realm, along with the Automated People Mover, were approved by the Council, with the planner’s report saying the design creates “an exciting contextual response to its setting”.

The station, which will be at the heart of the HS2 network in the Midlands, recently became the first railway station globally to achieve the BREEAM ‘Outstanding’ certification at the design stage  – a measure of sustainability for new and refurbished buildings – putting it in the top 1% of buildings in the UK for eco-friendly credentials.

The Council’s planning team said that the design of the station “draws upon the historic and agricultural character of the local area and delivers a strong sense of place and identity through its architectural form and the design of its landscape.”

The station’s design makes use of renewable technologies, and in operation, the station will use natural ventilation, daylight, harvested rainwater and solar energy to cut carbon. The Automated People Mover will link to the NEC, Birmingham International Station and Birmingham Airport, carrying up to 2,100 passengers per hour in each direction, with a service every three minutes along a 2.3km route.

HS2’s Stations Director Matthew Botelle said: “We’re extremely pleased to receive approval for the design of Interchange station, which will be net zero carbon in operation, and adopts the latest eco-friendly design and sustainable technologies. The operation of our stations will play a key role in the UK’s fight against climate change and achieving net-zero carbon emissions by 2050.

“Our architects and engineers have worked together with landscape architects, soil scientists, ecologists and water specialists to develop a truly unique, landscape-led, contextual proposition which draws on the local Arden setting for its inspiration, with lots of new habitats for wildlife.

“We have also worked with our local stakeholders to design a station that considers future major growth plans around the site. These are being led by the Urban Growth Company, will support 70,000 new and existing jobs, 5,000 new homes and 650,000m2 of commercial space across the UK Central Hub, generating £6.2bn GVA per year and bringing 1.3m people to within a 45-minute public transport commute of the station.”

Andy Street, the Mayor of the West Midlands, said: “HS2 has got a critical role to play in the West Midlands’ economic recovery by driving investment and helping to provide tens of thousands of jobs. I am therefore delighted that just weeks after we saw the bridge installed over the M42, the project has taken another step forward with the approval of the plans for Interchange station. Given the climate emergency the West Midlands is facing, it is also great to see how eco-friendly these plans are.

“It is brilliant news that the Interchange plans have been approved by Solihull Council, and I look forward to working with both the Council and HS2 Ltd to make sure we maximise the potential of this site. I am particularly keen to see the parking provision around the station become multi-storey to help free up critical housing and commercial land.”

HS2’s design consultants ARUP have worked closely with their landscape architects Churchman Thornhill Finch to develop a design which celebrates the local context and biodiversity of its native landscape associated with the Forest of Arden.

Kim Quazi, Director at ARUP Architects said: “Creating the world’s most sustainable station has always been at the heart of HS2’s design vision and this planning approval is testament to everything we have been working towards. This represents a significant milestone for station design and a step forward in our quest for greener rail.

“From the striking roof supported by light-weight glulam timber – inspired by the form of a leaf – to the green open spaces, everything has been selected to minimise the station’s carbon footprint and ensure that it reflects its surroundings and unique location.

“Equally significant is the approval for the Automated People Mover, which links Interchange Station directly to the NEC, Birmingham International Rail Station and Birmingham International Airport. A truly modern, world-class, elevated connection has been designed to complement its varying settings and includes new crossings of the M42 motorway and the West Coast mainline.”

Chris Churchman, Director at Churchman, Thornhill Finch said: “In our design, we wanted to capture the essence of the Warwickshire landscape of small fields, enclosed by hawthorn hedges punctuated by oak trees. It reconciles and humanises the large-scale station structure within the type of rural landscape expressed by the great British landscape painter John Constable.

“The design celebrates biodiversity through the use of signature native tree species supplemented by more unusual natives, notably crab apples, wild pear and plum. These are set within native hedges featuring a mix of blackthorn, hawthorn, hazel, dogwood, dog rose and elder.”

Through HS2’s broader landscape design and ecology work, vast amounts of information on local habitats have been gathered and overlaid with data from National Forestry and Ancient Woodland inventories. This has enabled a planting strategy which reflects a changing palette of woodland types, hedgerows and wildlife habitats. It includes plant species that are not only responsive to climate change but also to the local geology, hydrology, soil structure and landscape character alongside the railway.

Next steps include continuing to work with SMBC and stakeholders on maximising the development opportunities around the site, awarding the construction partner contract in 2022, and construction is planned to start in 2024.