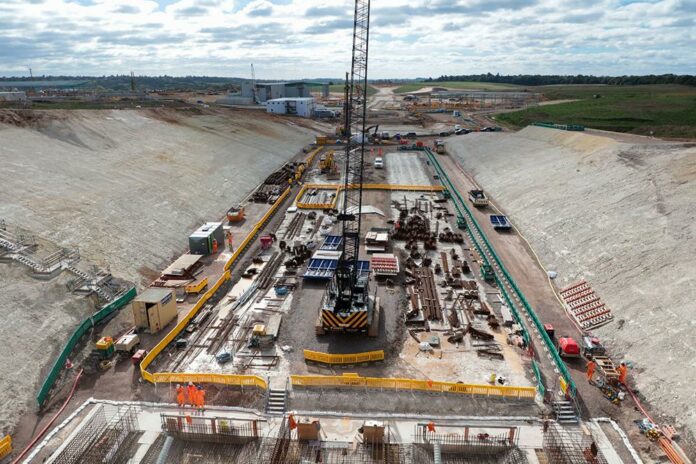 HS2’s first two giant Tunnel Boring Machines (TBMs) have arrived in the UK and will be ready to start work on the UK’s largest infrastructure project early next year.

The two enormous 2,000 tonne machines – named Florence and Cecilia – will now be meticulously reassembled, tested and commissioned, by an expert team of tunnelling engineers, before they start work on the high speed rail project’s first tunnels.

The 10-mile-long ‘twin bore’ Chiltern tunnel will be the longest on the project, the first to start construction, with the TBMs set to be underground, working 24/7 for more than three years.

Welcoming the news, HS2 Ltd Chief Executive Mark Thurston said: “The launch of our first tunnelling machines will be a defining moment in the history of HS2 – and our work to deliver a high speed railway that will offer a low-carbon alternative for journeys across the UK.

“Construction is now well underway, with more than 13,000 jobs supported by the project, both directly and in our UK-wide supply chain. The arrival of Florence and Cecilia is a major step forward and our expert team will now work to assemble, test and commission them before their launch next year.”

Designed specifically for the mix of chalk and flints under the Chilterns, the two identical TBMs will dig separate tunnels for north and southbound trains, with Florence set to launch first and Cecilia to follow a few weeks behind.

Each machine operates as a self-contained underground factory, which as well as digging the tunnel, will also line it with concrete wall segments and grout them into place as it moves forward at a speed of 15 meters a day. Each tunnel will require 56,000 segments – which will all be made on site. A crew of 17 people will operate each TBM, working in shifts to keep the machines running 24/7. They will be supported by over 100 people on the surface, managing the logistics and maintaining the smooth progress of the tunnelling operation.

Align Project Director Daniel Altier commented: “Now that the parts have arrived the detailed job of assembling and commissioning the machines has begun.

“There are also considerable other activities continuing on our site to prepare for the launch of Florence and Cecilia next year. This includes the construction of a factory that will manufacture the concrete segments to be used to line the tunnel and a slurry treatment plant that will process material from the tunnels.”

The Align Joint Venture expects to recruit 1,200 vacancies, with over 100 opportunities for apprentices. They plan to target their recruitment and investment in upskilling local people who are currently unemployed, with a particular focus on women, under 25s and those with disabilities.

HS2 says this is another great example of the vital role HS2 continues to play in the UK Government’s Plan for Jobs to protect, support and create  employment, which has helped millions of people to continue to provide for their families over the past eight months of the COVID-19 crisis.

Built by Herrenknecht, a world leader in TBM manufacturing, at its factory in south-west Germany, the two 170m long machines were transported to the UK in more than 300 separate shipments over the course of two months, with the parts now safely delivered to the Align Chiltern tunnel site, to the west of London just inside the M25.

The names of the two TBMs were suggested by students at Meadow High School in Hillingdon and The Chalfonts Community College, Buckinghamshire, which are close to the tunnel launch site. They were inspired by Florence Nightingale, the founder of modern medicine, and pioneering astronomer and astrophysicist, Cecilia Payne-Gaposchkin.

Around 4,500 people from across the UK took part in the poll to select the final names, with Florence taking 40% of the vote and Cecilia a close second with 32%.

HS2 is using virtual reality and real-time monitoring technology built into infrastructure such as rails, bridges and overhead lines in a push for greater...
Read more
HS2

HS2 has appointed TK Elevator to the framework to deliver 300 leading-edge lifts and escalators for four new station facilities being built as part...
Read more
Construction

Transport for London is reminding its customers that a major closure on the London Underground to bring step-free access to the northern line and...
Read more
- Advertisement -