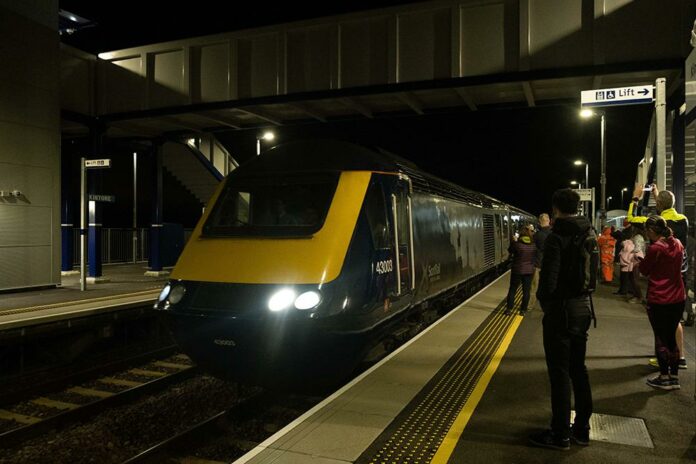 Click here to listen to the latest rail news on Thursday, 15th October 2020

Kintore has re-joined Scotland’s Railway after an absence of 56 years this morning with the opening of the town’s new £15 million station.

Providing an interchange between rail and road, the two-platform station is fully accessible with step-free access between platforms via a footbridge with lifts.

Southeastern proposes ‘game-changing’ Dover to London route which would take under an hour.

An article on Kent Live says chiefs were hopeful about plans to improve an existing high-speed rail link from Dover Priory to London St Pancras, which would take less than 60 minutes of travel time.

The article says Scott Brightwell said a proposal to increase rail capacity across several Kent routes continue to be discussed with Network Rail.

Trains were yesterday diverted at Stirling railway station after a car smashed through a fence and landed on the tracks.

The article features in several of the newspapers, including Mail Online, that says two women were taken to hospital after the Renault Clio crashed onto the tracks.

Photographs show the vehicle, which is believed to have crashed through a fence from the station’s car park, stopped across two tracks.

Finally, and one of the famous ‘Cockleshell Heroes’ from World War Two has had a train named in his honour by Great Western Railway.

The article on ITV.com says Corporal George Sheard from Plymouth was among a group of Royal Marines who volunteered for hazardous service, planting mines on enemy ships off southwestern France.

He drowned on the mission known as Operation Frankton aged just 27 years old.