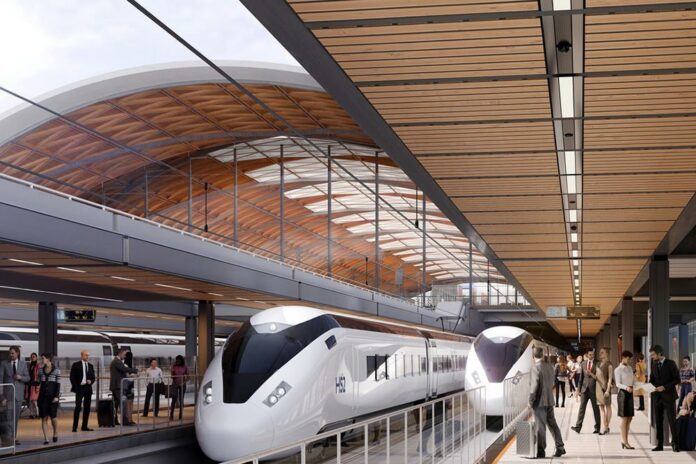 Click here to listen to the latest rail news on Tuesday, 9th November 2021

In today’s headlines, the UK Government has spent more than £700m on legal fees for the HS2 project since 2017, the Yorkshire Post reports.

Figures from market intelligence platform Tussell published by The Lawyer magazine revealed £727m has been spent on legal battles connected to the HS2 project by the Department for Transport – half of its total £1.4bn spend for the period.

While most work relates to real estate purchases, there have also been a series of legal disputes connected to the project, including a £500m Siemens Mobility claim over the project’s rolling stock procurement process.

A Department for Transport spokesperson said the project involves “complex legal work” and that “expert oversight is integral to ensure value for the taxpayer”.

Based within South and City College’s Bordesley Green campus, the Academy is the first in the region dedicated to providing training in readiness for jobs on the project.

It is estimated that construction of HS2 will generate a labour demand of around 10,000 jobs from now until 2027/28.

A public inquiry examining the pros and cons of reinstating passenger trains between Newcastle and Ashington will begin over the next four weeks.

An article from the BBC says a government-appointed inspector will hear debates over the Northumberland Line project, which would see 18 miles of track upgraded on the former Ashington, Blyth and Tyne Line.

Northumberland County Council believes the link will bring huge economic benefits, and if approved work will begin in summer 2022, with the line due to open in winter 2023.

The installation was created by the train operator as part of its mission to raise awareness of the small changes that people can make to lead a more environmentally friendly lifestyle – including travelling by train.

It consists of more than 600 individual plants from six species and has been arranged to look like an LNER Azuma train. Visitors to the wall can also take home a small number of Scottish wildflower seeds from Arbroath to grow in their own gardens at home.

That’s it from today’s round-up, for the latest in rail news visit news.railbusinessdaily.com.