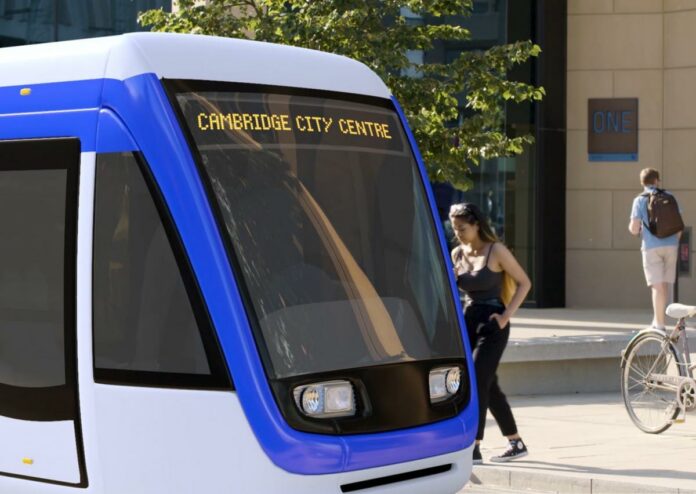 A detailed report examining the feasibility of a metro system for Greater Cambridge and the wider region has found a ‘compelling case’ for the scheme.

It also identified that the cost of the pioneering scheme, estimated at around £4 billion, has the potential to be met through a range of funding sources.

The report was commissioned by the Cambridgeshire & Peterborough Combined Authority and has been welcomed by its Mayor, James Palmer, as evidence that the delivery of CAM offers a world class, sustainable transport solution that will support ambitions for the future growth of the whole area.

Both the economic and strategic case for the CAM, which was a key focus of the report, is described as particularly compelling. It found up to 100,000 jobs and 60,000 new homes could result from the CAM. Based on both conservative and upper estimates of the CAM’s potential, the economic benefits would outweigh costs by two to four times. The ‘benefit-cost ratio’ (BCR) figure of the CAM would be considered as offering very high value for money by the Department for Transport’s assessment standards.

This also compares favourably for other major transport infrastructure projects like Crossrail 1 and 2, which each have a BCR of just under 2, or the Northern Line Extension whose BCR is 3.

The scheme would include 12km of ‘twin bore’ tunnelling under Cambridge city and two underground stations, one at the city centre, and one at Cambridge Station. The CAM would serve inner transport corridors in the Greater Cambridge area from the city to Cambourne, Granta Park, Waterbeach and Newmarket Road and Trumpington park and rides. It would also serve the regional area, with corridors extending to St Neots, Alconbury, Mildenhall and Haverhill. The CAM would extend in total to 142km.

The SOBC report found the CAM can help fulfil the Combined Authority’s ambition of a ‘modal shift’ in transport preferences, away from the private car, reducing congestion, emissions, accidents and contribute to improving quality of life.

The report details how partnership working and alignment of resources with the Greater Cambridge Partnership (GCP) will help deliver the scheme, while also fulfilling the ambitions of both bodies for sustainable growth.

A report to the Combined Authority Board on March 27 will recommend approving £1 million in funding to undertake the key next step of an Outline Business Case (OBC). The Combined Authority is inviting local business groups and other stakeholders to also contribute to the costs of taking the project forward. This would include the development of a detailed funding strategy and a programme of stakeholder engagement, completing in February 2020.

Produced by consultants Steer, the SOBC also looked at the financial case for the CAM to demonstrate it can be funded, the case for its commercial viability and the management case for how it can be delivered.

World-renowned engineering consultants Arup have also been working with the Combined Authority on the CAM, and as part of the SOBC undertook a technical report on funding and finance. The report has found a funding strategy for the CAM should be done on the basis of ‘beneficiary pays’ where those who benefit from the transport infrastructure should contribute to its cost.

Mayor Palmer has previously talked about the potential of land value capture, tax increment financing and the development of garden villages as ways to help fund the transport infrastructure. Given the expected uplift for the national economy, it is also anticipated that central Government would help finance the scheme. A blend of funding sources from central Government and local contributions is expected to form the basis of a future funding strategy.

There is a precedent for schemes being funded in this way, including Crossrail and the Northern Line Extension in London.

The CAM would operate as a ‘turn up and go’ service where users would arrive at terminals with the expectation of a service within minutes. CAM would operate with high-quality, zero-emission ‘trackless metro’ vehicles, powered by electric batteries recharged overnight and at route termini throughout the day, without the need for overhead wires. Vehicles would offer a high level of passenger comfort, comparable to trams, with a maximum speed of about 55mph. With the CAM, it would be possible to cross the city from East to west in 12 minutes and other key peak journey times could be halved.

Interchanges will be kept to a minimum, but where they are necessary in the city centre, they will be ‘same platform’ avoiding the need for stairs, lifts or escalators. The metro be able to meet changing growth and demand and the construction of segregated routes means that it will be able to transition to autonomous technology when it becomes viable.

Partnership working between the Combined Authority and GCP has also been highlighted as key to the CAM’s delivery. That includes the aligning of resources and the joint appointment of a CAM programme director to ensure that work on the CAM routes remains integrated and coordinated across both bodies.

Construction could start as early as 2021 with the City Deal-funded schemes, with the core metro infrastructure anticipated to be built between 2023 and 2029.

The CAM will be designed to integrate with existing transport infrastructure, including the national rail network, bus services and cycling and walking routes.

The CAM will also link key employment sites like business parks to reduce commuter pressure on existing road and rail networks. Metro stations would act as transport hubs, which buses, cycling and walking routes would feed into, and in preference to the private car.

Key stakeholders including local authorities, businesses, academics and other member organisations have backed the CAM as helping to offer a sustainable future for the region.

Mayor James Palmer said: “This is a hugely significant step forward in what will be a transformational project for Cambridgeshire and Peterborough and one of the most pioneering transport infrastructure projects seen in the UK.

“What we have is compelling case for moving forward with this scheme. It will offer world-class public transport that will reduce reliance on the private car. It will help to meet the ambitions we have to create jobs, deliver economic growth and unlock new housing. The CAM will be the scheme around which we can tackle the transport infrastructure challenges which threaten our future economic prosperity.

“In short, we have a scheme that will deliver on our priorities.

“What is also hugely important is that this study shows we have a scheme that is deliverable and which is fundable and that every pound invested in the CAM will repay itself two to four times over.

“A transport infrastructure project of this scale is absolutely appropriate to the needs of the area. The CAM will serve an area of international renown, with a dynamic economy full of world-class businesses, academic excellence and pioneering research and development. We must develop infrastructure in the same spirit of ambition and which will foster the continued growth of our economy to 2050 and beyond.”

“Delivering the Metro will be a massive boost for Greater Cambridge and will see a high quality future public transport network linking existing communities in all directions with new homes and new jobs – one that navigates through and under our much-treasured but medieval city centre.

“The GCP has made enormous strides over the past three years on public transport schemes that will make a real difference to people. We’ve also committed around £400 million on four new routes; south-east, west, north and east that, taken with the existing busway routes north and south of the city, could give a real head start on six main CAM routes out from Cambridge.

“But to get Government’s contribution and support, it is critical that the next stage identifies the funding methods needed to secure close to £4 billion in capital and show the Metro will have zero overall operating costs. The Metro is a vital project that will boost national economic growth – like major London transport projects we will need Whitehall’s help to give us the powers needed to generate funds ourselves or secure a significant grant for development.

“This Metro, combined with other transport schemes like better rail and the proposed Cambridge South station, will transform public transport, not just in Cambridge but right out across the whole of southern Cambridgeshire into our neighbouring counties.”

Despite the impact of Strom Arwen, Network Rail has successfully demolished and replaced the bridge over the railway at Lynebeg, south of Inverness on...
Read more
Infrastructure