Laser and drone technology recreates Ribblehead viaduct like never before 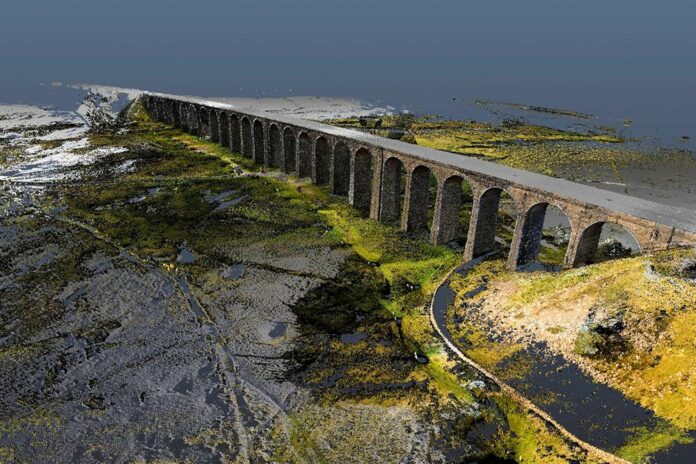 Laser scanners and drones have been used to map every inch of the iconic Ribblehead viaduct as part of a major restoration project to secure its future for passengers and tourists.

An essential upgrade to brickwork and drainage is underway on the 144-year-old structure which carries the historic Settle to Carlisle railway 400 metres across the Ribble valley.

As part the £2.1m Great North Rail Project investment, North Yorkshire’s most recognisable railway icon was 3D scanned and turned into a computer model by surveyors.

Phil James, Network Rail’s North West route director, said: “We’re always looking to innovate on the railway and seeing drones and lasers being used to care for such an historic structure is really impressive.

“I was at Ribblehead viaduct when we started work a week ago and saw for myself the huge scaffolding platforms now in place so my team can improve brickwork, mortar and drainage. Great care and attention is going in to make sure our work is right from a heritage perspective. This digital model plays a major role in that as we secure the Grade II listed-structure’s future for passengers and tourists as part of the Great North Rail Project.”

Network Rail has today (Monday 23 November) released the impressive footage of the Victorian viaduct as realised by the 21st century technology.

A LiDAR survey* was carried out by contractor Commendium in conjunction with heritage consultancy firm Wardell Armstrong.

Ribblehead viaduct is the biggest man-made structure Commendium has ever scanned.

The data gathered was then used to build up the 3D computer model by Network Rail’s specialist computer aided design (CAD) team.

Richard Walters, chief executive officer for Commendium, said: “We have all known and loved this location for most of our lives, it is even part of our childrens’ cultural awareness with them learning songs about it at school. So to survey it has been a privilege.  The resulting LiDAR scan not only shows areas which need repair, but also areas where water could damage the stonework in the future, so leading to other preservation works.”

The maintenance work on Ribblehead viaduct taking place between now and February 2021 involves:

No major disruption is expected for passengers using the Settle-Carlisle line during the viaduct’s 2020/21 maintenance.

Passengers are reminded to continue following government COVID safety advice and to check before travelling at www.nationalrail.co.uk or with their train operator.

How the 3D computer model of Ribblehead viaduct was created

*This was done using LiDAR technology.

Over 100 separate scans were taken from locations underneath and on top of the viaduct.

In a LiDAR system, light is emitted from a rapidly firing laser like a strobe light.

This light travels to the ground and reflects off of things like buildings and tree branches. The reflected light energy then returns to the LiDAR sensor where it is recorded.

This data is then used to build up the 3D computer model.

Ribblehead viaduct opened in 1876 bridging the gap between Ribblehead and Dent over the exposed and windy Batty Moss.

We’re proud to look after such a historic piece of Britain’s railway. Ensuring our Victorian structures remain in safe working order and last for generations to come is a great responsibility.

To do this, we undertake visual exams of the viaduct annually and detailed inspections every six years. We also typically carry out a major renewal every 10 years and any minor works as an when necessary.

Severe weather is one of the challenges we face as custodian of Ribblehead viaduct, which crosses open land in an exposed position.

For more information on the history of the Settle to Carlisle line click here.

Passengers in East Yorkshire will soon benefit from a more modern, reliable railway as Network Rail is carrying out major work to upgrade the...
Read more
Network Rail

Network Rail has launched a competition to highlight some of the exciting Information Technology careers available at the organisation, and in the wider rail...
Read more
- Advertisement -