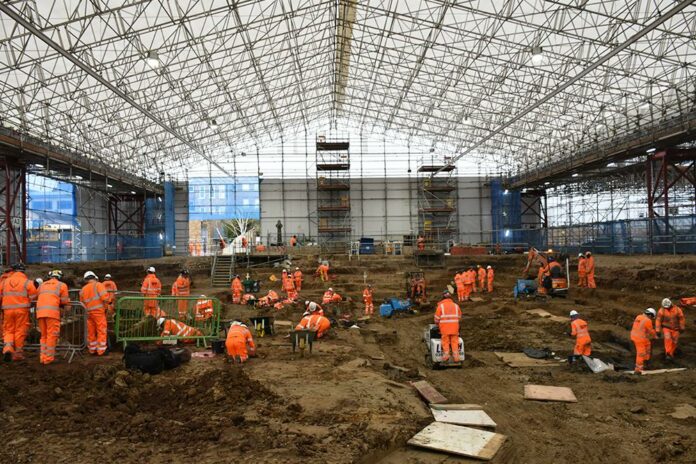 HS2 Ltd, working with the Archbishops’ Council of the Church of England, have agreed with Brookwood Cemetery in Surrey for reburials as a result of excavations at St James’s Gardens to take place there.

In October 2018, HS2 archaeologists began the excavation of one of London’s 18th and 19th century burial grounds, to the west of Euston station in St James’s Gardens. The disused cemetery is required for the construction of the UK’s new high speed railway line High Speed Two and the new London HS2 station. The site was home to over 50,000 of London’s deceased.

Brookwood Cemetery was conceived in 1849 by the London Necropolis Company to house London’s deceased at a time when the capital was unable to accommodate increasing numbers.

Brookwood was connected to the capital by a special railway branch line, and the capital’s dead were taken there by hearse train carriages. Initially there were two stations at the cemetery – the northern one serving the non-conformist side of the cemetery and the southern the Anglican side.

It is not unusual for the populations London’s burial grounds to be relocated, and Brookwood Cemetery has reburied London’s deceased for over 150 years. The first major reburials took place in 1862 when the construction of Charing Cross Railway station and the routes into it required the burial ground at Cures College in Southwark to be demolished. London’s Euston station was extended westwards in the 1940s and some of the occupants of St James’s Gardens required reburial. Those remains were rehomed at Brookwood so this agreement to rebury the remaining occupants of St James’s Gardens there means that the buried population will remain together.

Helen Wass, HS2 Ltd’s Head of Heritage said: “Throughout our archaeology programme and the excavation of burial grounds, we have treated the buried population with due dignity, care and respect. The final destination for the human remains excavated from St James’s Gardens is fitting, as they will be reunited with the previously relocated burials, moved over 70 years ago.

“HS2’s unprecedented archaeology work between London and the West Midlands has been a once in a lifetime opportunity to tell the story of our past, create opportunities in the present and leave a lasting legacy for generations to come.”

Cllr Graham Cundy, Woking Borough Council’s Lead Member for Brookwood Cemetery, said: “Established mid-19 century on heathland acquired from Lord Onslow, Brookwood Cemetery is one of the largest burial sites in the country. A new grassland plot on the south side of the cemetery has been prepared where Brookwood will once again accommodate those displaced by the Capital’s expansion.

“Although you can no longer arrive at Brookwood via the London Necropolis Railway, you can access the cemetery directly from Brookwood mainline train station. The 500 acre site is a Grade I listed park and the grounds are open daily to visitors who want to explore the cemetery’s historic ties to London.”

A team of over 200 archaeologists and related specialists undertook the careful archaeological work, in advance of construction. They have already discovered much about the lives and deaths of ordinary Londoners’ as well as uncover the remains of notable people including explorers, soldiers, artists and musicians. Further analysis of a proportion of the human remains will tell us more about the individuals who inhabited London at this exciting time in its history.

All the human remains are to be reburied in consecrated ground, as per HS2 Ltd’s commitment to the Archbishops’ Council of the Church of England.

It was announced in October 2019 that the remains of one of St James’s Gardens population, Captain Matthew Flinders, the British explorer who first circumnavigated Australia and gave the country its name, will be buried in his home village of Donington, Lincolnshire. This follows a request made by the descendants of the Flinders family and the local community for his remains to be returned to the village where he grew up.

The fascinating story of London’s past uncovered through the excavations at St James’s Gardens is currently being showcased in a BBC documentary series, HS2 – The Biggest Dig. The three part series continues on Tuesday 22nd September on BBC Two and is available on BBC iPlayer.