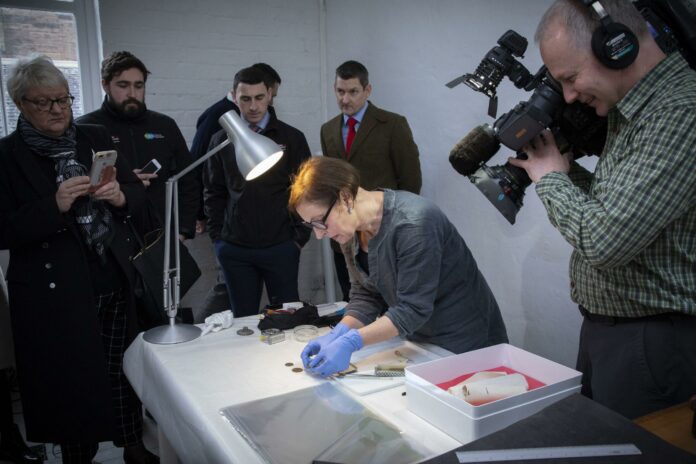 Morrison Utility Services is delivering the enabling swept path works as part of the first phase of work on the City of Edinburgh Council’s transformational project. The programme of works involves road excavations to allow utility diversions, track-laying, installation of tram infrastructure, public realm improvements and heritage and archaeology works.

The cache of mementos was unearthed when the Robert Burns statue on Edinburgh’s Baltic Street was temporarily removed to make way for works taking place. Conservators and archaeologists excavating the site found the lead time capsule beneath a lead sheet in a purpose-carved socket in the plinth underneath the statue. It is believed to have been placed there when the statue was erected in 1898, though the conservators opening the capsule learned that it had been subsequently opened and resealed in 1961.

Found inside the capsule from 1898 were newspapers, coins of all denominations from the time, a pamphlet including information on crimes investigated in Edinburgh in 1897, a small leaflet containing rules and the constitution of the Leith Burns Club and a letter from the club, who also erected the Burns statue, detailing members, information on the statue and a Burns poem.  From 1961, there were also newspapers and a letter from the people who had opened the original time capsule.

Council Archaeologist, John Lawson, said: “It’s not every day that we unearth direct messages from our past and information on what people felt was important to commemorate Robert Burns for future generations. We’ll be sharing our own messages with the future when the statue is returned, by placing a new time capsule, and we’re looking forward to working with the local community to find out what they think is important about Leith today and what they hope Leith and Edinburgh will be like in the future.”

Conservator Nic Boyes, working on behalf of Morrison Utility Services, commented: “For me it was an utter delight to have done work to reveal the contents of this time capsule and I must pay credit to the people who opened it in 1961. They retained the container which has been a perfectly functional vehicle to bring these items, yet to be really processed, into our knowledge. Once we’ve read these newspapers and properly assessed all of these items we’ll have a three-dimensional understanding of how in 1961 they regarded Burns and, more importantly, how in 1898 they regarded Burns – and how they came to build that fabulous statue.”

The Trams to Newhaven project will add 2.91 miles of track in both directions, connecting Leith and Newhaven to the current end of the Edinburgh tramline at York Place, with 8 new stops. Works on the extension began in November 2019 with Edinburgh Trams timetabled to take their first passengers to and from Newhaven in Spring 2023.

A Sheffield firm has been chosen to provide a range of components for East Midlands Railway (EMR) and Hitachi Rail's new Intercity fleet. Stauff is...
Read more
Social Responsibility

Siemens has run a competition to create a sustainable transport system of the future,  identifying some of the keenest minds in engineering, technology and...
Read more
Supply Chain

SWGR continues on its path of growth with new appointment