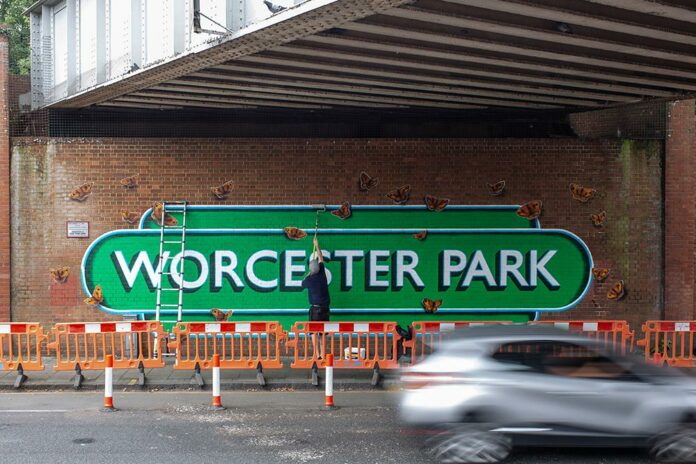 Network Rail has joined forces with street artist Lionel Stanhope to establish a mural to honour the residents of Richmond House in Worcester Park who lost their homes following a fire in September 2019.

The mural displays the Worcester Park town centre name but also features 24 butterflies, each one representing one of the families who lost their home. Butterflies are also symbols of new life, and the mural is a way of bringing positivity into the community.

This the first mural to be funded by Network Rail Wessex, and is on the wall under the railway bridge on New Malden Central Road, near the station.

The green background represents the parkland surrounding The Hamptons as well as the town’s historic link with the Great Park. Worcester Park takes its name from the 4th Earl of Worcester, who was keeper of the park.

The artist Lionel Stanhope worked with residents on the mural which was finished on 9 September marking the one-year anniversary of the fire.

Robert Hodgkinson, Network Rail Wessex franchise and access manager said: “The mural is a way to bring positivity to the community while maintaining focus in a sensitive way, to the tumultuous event a year ago.

“We considered a street art mural to be appropriate – a way to thank and celebrate every neighbour for the community spirit they have shown.

“We’re always open to creative ways to make our railway look better and more welcoming for the neighbourhood.”

Lionel Stanhope said: “I’m really pleased with how the mural turned out.

“To some, it’s a piece of artwork for people to enjoy, but to others – particularly what the 24 butterflies represent –  it will mean something else, and it’s a way a giving the community a focus.”

Jennifer Frame, one of the Richmond House residents, said: “We are really proud of the art that Lionel Stanhope has created, and we want to thank Network Rail for all their support.

“It has been a difficult year for all the Richmond House residents, but this mural represents a sense of renewal, new beginning and hope for the future. It’s our way of bringing something bright and positive to our community in return for all the support they gave us.”