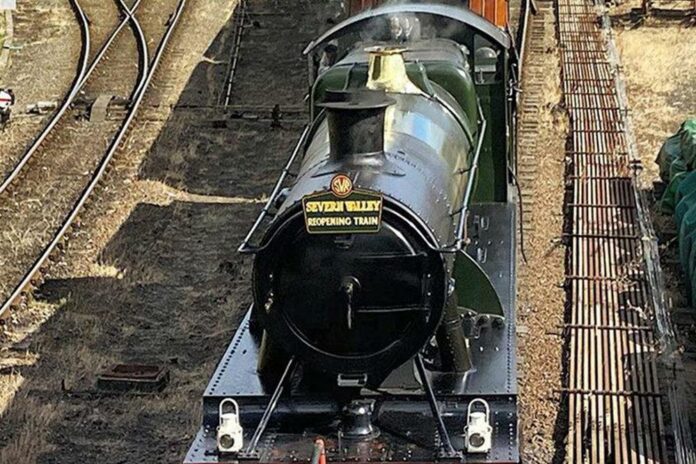 Track from a disused railway line that was removed as part of the Wednesbury to Brierley Hill Metro extension has been given a new home after being donated to the Severn Valley Railway by Transport for West Midlands and the Midland Metro Alliance.

More than one mile of track has been removed from along the disused railway corridor and given to the heritage railway line to help with its annual track replacement programme. The disused corridor will now be transformed as part of the biggest light rail project in the UK.

The Midland Metro Alliance is building the extension on behalf of Transport for West Midlands and the donation has come as a welcome boost to the much-loved heritage steam and diesel attraction, which recently reopened its doors after closing in March due to the coronavirus pandemic.

Mayor of the West Midlands, Andy Street, said: “We are great supporters of our heritage railways and know that many thousands of people enjoy reliving the golden age of steam with a ride on the Severn Valley Railway. So it is fantastic that the track from the former South Staffordshire Railway, which we don’t need as part of our Midland Metro expansion plans, will be recycled and once again used on an active railway line. The Wednesbury to Brierley Hill Metro extension will help bring huge economic benefits to the region, which is why it is so important for us to support local businesses, particularly as they bounce back from the COVID-19 crisis.”

Sonny Hudson, Delivery Manager at the Midland Metro Alliance, added: “I am pleased that during construction for the extension we have been able to help preserve heritage for generations to come. Being part of the team that helped remove the rail makes it ever more rewarding to see it in its final position. The Midland Metro Alliance puts sustainability at the heart of everything it does and this project is not just about putting spades in the ground but supporting the communities across the Midlands, whether that be through local employment, charity support or donations such as this. We couldn’t be happier to have donated to such a worthy organisation.”

The donated rail was loaded on to one of Severn Valley Railway’s heritage diesel trains at Eardington Halt Railway Station near Bridgnorth before making the journey along the 158-year-old route to a storage site where it will be stockpiled before being used to replace some of the existing rail in future track re-laying operations.

Helen Smith, General Manager at the Severn Valley Railway, said: “We are hugely grateful to Transport for West Midlands and the Midland Metro Alliance for their generous donation of track and sleepers.  It will go a long way in helping us to replace track during our regular annual track relay operation. This donation will also help to save us a considerable amount of capital, as it means we will not have to purchase rail and sleepers when we next carry out track relaying, and this is a welcome boost during these uncertain times.

“Gifts-in-kind like this from outside organisations are very important to the SVR, and we urge other companies to get in touch if they are considering supporting us in this way. This donation comes to the Severn Valley Railway at the same time as an award of £906,000 from the government’s Culture Recovery Fund, and both these boosts are hugely welcome at what is an extremely difficult time for the railway as it tackles the impact of the coronavirus.”

Construction for the Wednesbury to Brierley Metro extension is currently underway across the Sandwell and Dudley boroughs and when complete will boost public transport in the Black Country, by providing much-needed links to the existing heavy and light rail networks, helping people to access education, training and career opportunities across the West Midlands.

The extension will also play its part in helping to regenerate the Sandwell, Dudley and Brierley Hill areas, making it more attractive to investors and providing easy access to the region’s many and varied attractions via public transport. Once up and running there will be up to 17 new stops and the new system will also reduce journey times when compared to travelling by car.

The Severn Valley Railway runs a fleet of steam trains along a 16-mile route from Bridgnorth in Shropshire to Kidderminster in Worcestershire. It reopened to the public in August and is running regular services using its extensive fleet of compartment stock, to enable groups to travel in their own secure and private accommodation. Tickets can be booked at www.svr.co.uk.

Download article
Previous articleLewis Salter: “This is a great time to be involved in rail”
Next articleHS2 reveals viaduct designs for Edgcote and Lower Thorpe