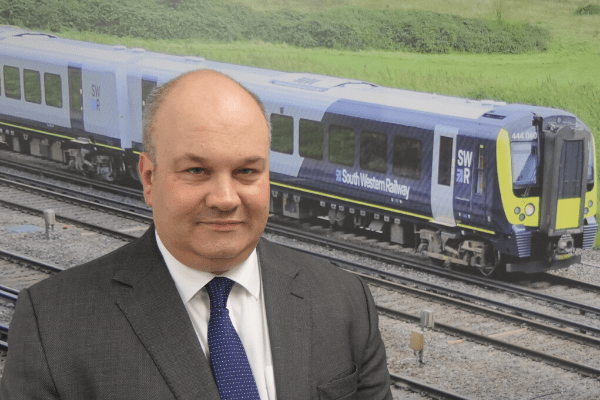 Congratulations to several workers in the railway industry who have seen their efforts recognised in the latest New Year’s Honours List.

He said: “This is an honour that reflects the efforts of thousands of railway colleagues I have worked with throughout my 31-year career. The railway plays a part in the daily lives of millions, and I am very proud and delighted that my small contribution has been recognised in this way.”

Martin Frobisher OBE, Network Rail’s Group Safety and Engineering Director – for his work supporting the railway response to the coronavirus, the construction of the Nightingale hospitals and supporting the army reserves.

He said: “This is completely unexpected. I am so surprised and extremely grateful to be included in the Queen’s New Year’s Honours list. This was a real team effort and there were many people throughout Network Rail who helped to deliver this, so I want to say a massive thank you to them. This award belongs to the whole team. I am humbled to have worked alongside so many incredible people this year who did amazing work to help the NHS and keep the country moving.”

Loraine Martins OBE, Network Rail’s Director of Diversity and Inclusion – for her work to improve diversity throughout Network Rail and her voluntary work with the National Mentoring Scheme.

She said: “I’m tremendously humbled to be included in the Queen’s New Year’s Honours list, so a big thank you to those involved in nominating me. I didn’t see this coming at all. I’m immensely grateful to my teams, past and present, and to all those who work with me at Network Rail and in our extended railway family.”

Debbie Francis OBE, City Executive for the North at Arcadis – for her contribution to raising the profile of women in rail over the last decade. During her career in rail, the former chair of Women in Rail North West has championed the promotion of diversity and inclusion.

She said: “Receiving the OBE is a fantastic honour and I feel overwhelmed. I’m privileged to be in a position where I can continue to make a valuable contribution to raising the profile of women in the rail sector. I am passionate about personal development, pushing the boundaries and accepting everyone has different goals.

“For me, the issue around diversity and equality all boils down to flexibility and caring about people. I firmly believe that treating people in your business with respect, and making it a great place to work, is one of the most important parts of success.”

Shane Andrews MBE, Network Rail’s Project Operations Interface Specialist, Wales – for his work improving inclusivity within the rail industry, particularly with the LGBT+ community, and for volunteering in various roles within his local community for more than a decade.

He said: “I am delighted to be recognised in the New Year’s Honours list. It’s fair to say that many people in the LGBT+ community haven’t always viewed the railway as an attractive place to work, and so I am pleased to have played my part in improving diversity and inclusivity in this industry. Through my leadership of the Archway network, we will continue to ensure Network Rail is a great place to work for all and a place where everyone matters.”

Andy Savage MBE, Executive Director of the Railway Heritage Trust, honoured for his work supporting railway heritage and for more than 40 years of volunteering with the Ffestiniog Railway.

Sharon Sear and Mat Sullivan, both received BEMs. The London Underground staff have been recognised for their work to protect both colleagues and customers from the spread of coronavirus, with their actions helping those needing to make essential journeys.

Sharon said: “I am thrilled to be given this honour, and I see it not just an award for myself but in recognition of the collaborative effort between my team, colleagues in Safety, Health and Environment and our supply chain. It’s great to know that our work helped keep my colleagues and our customers safe. It’s been a tough year but I’m proud to have helped TfL respond to the pandemic and I know my former colleagues will continue to keep this work going.”

Mat said: “The success we experienced in getting the essential safety equipment such as face coverings and hand sanitiser out to our colleagues across London Underground wouldn’t have been possible without the hard work and collaboration of our Warehouse teams in Acton and Uniform Services. To be recognised by my peers and colleagues for doing my job is a humbling experience and one I find quite overwhelming.”

Network Rail has thanked passengers for their patience during last week’s five-day closure of the railway between Axminster and Pinhoe, which allowed engineers to...
Read more
Train Operating Companies

Northern is fitting new technology to a number of its trains to help combat leaves on the line and stop disruption for passengers during...
Read more