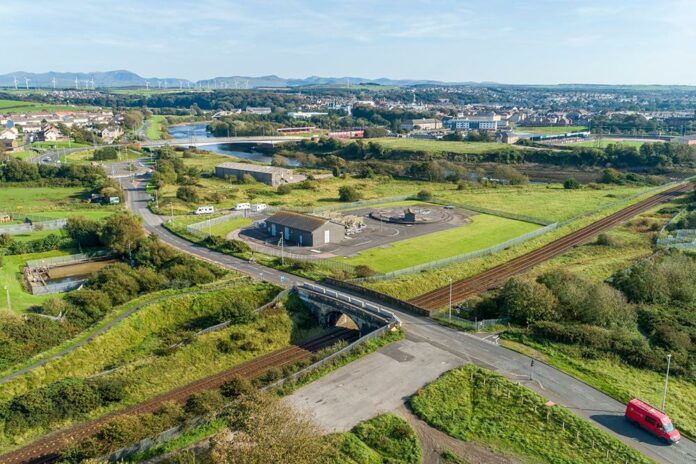 A multi-million-pound railway bridge replacement in Workington will soon benefit passengers and the local economy in Cumbria.

It provides key access for thousands of vehicles which transport 500,000 tonnes of cargo to and from the Port of Workington each year.

Weight restrictions limiting the flow of traffic to just one-way are in place because of the bridge’s current state.

The major investment will restore traffic in both directions.

The work will include:

A temporary level crossing will be installed across the railway to allow continued access to the Port of Workington throughout construction.

Roisin Nelson, sponsor for Network Rail, said: “This Great North Rail Project investment will not only secure the future of the railway but will also hugely benefit the Port of Workington and its businesses and customers. Siddick bridge will be entirely replaced with a modern structure in a £4m upgrade which will mean more reliable journeys for passengers and freight on the railway below as the new structure will need much less maintenance in the future.”

The work has been planned to cause the minimum amount of disruption to passenger and freight services.

Passengers are advised that a weekend closure of the railway will be needed to lift the new bridge into place in May next year.

Chris Jackson, regional director at Northern, said: “It’s fantastic to see further investment and enhancement of Cumbria’s rail network. The new bridge will make the infrastructure in Workington fit for the 21st Century and will provide long-lasting benefits for Northern’s customers.”

The major renewal project will start in November as is due to be complete in summer 2021.

The £4.04m work is being funded by the Cumbria Local Enterprise Partnership, Cumbria County Council and Network Rail, with work due to be carried out by local firm, Story Contracting.

Cllr Keith Little, cabinet member for highways and transport at Cumbria County Council, said: “I’m very pleased to see works getting underway to replace the bridge – the new structure secures the future of the port, and will be a vital part of the redevelopment project, helping to get people and goods where they need to be, as well as boosting transport and connectivity links. By working in partnership with Network Rail, the Port of Workington, Cumbria LEP and local businesses and residents, the project to redevelop this site will benefit the local community for generations to come.”

Steve Curl, board member for transport and infrastructure at the Cumbria Local Enterprise Partnership, said: “Cumbria LEP is delighted to support the replacement of Siddick Bridge with £2 million of Local Growth Fund support. Improved connectivity between the Port and Cumbria’s and the North’s transport infrastructure will significantly strengthen Cumbria’s economy.”

Mark Jenkinson, MP for Workington, said: “I have long been a supporter of developing the Port of Workington and it is excellent news that Oldside has been allocated a £4 million investment. The bridge, that leads to a strategically important site – the Port of Workington – will benefit from both carriageways being restored to ensure that the hundreds of thousands of tonnes of cargo that is transported to the Port each year can continue. The Great North Rail project will directly benefit my constituency and those who work at the Port. I want to see the Port develop including development of land around the Port. This investment will ensure that this area is accessible.”

Cllr Mike Johnson, deputy leader of Allerdale Borough Council, said: “I am delighted that this project is has finally come to fruition thanks to the hard work of all those involved. This is great news for the economy of Workington, Allerdale and even further afield. The replacement bridge will give investors confidence in the long term sustainability of the port and bring greater opportunities for investment on the land around the port now that the access to the sites will be enhanced.”

Passengers are reminded they can plan their journeys in advance at www.nationalrail.co.uk.

Seven new ticket gates, an open-plan ticket area, enlarged waiting room, café and toilets are now in use as part of a remodelling of...
Read more