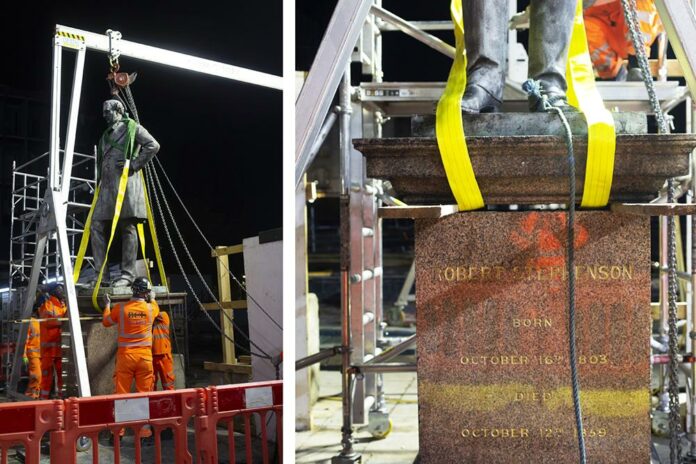 A Grade-II listed statue of railway pioneer Robert Stephenson has been removed and put into safe storage while Euston station undergoes its major HS2 redevelopment.

The 150-year-old bronze monument to Robert, the son of ‘father of the railways’ George Stephenson, came to Euston in 1871 and has stood in pride of place in its current location since 2008.

Now the listed sculpture of the 19th century civil engineer is being taken down and protected while the railway evolves for the 21st century.

But it’s not the first time the statue has taken a break from welcoming passengers to London – the monument has been relocated a number of times since the Victorian station was demolished in the 1960s and Euston rebuilt as we know it today.

Joe Hendry, station manager at Euston station, said: “We will miss having the statue at the station – so it’s absolutely vital that this tremendous part of railway history benefits from best-in-class protection. It’s been a great team effort to plan this work as part of the wider HS2 redevelopment. It means Robert Stephenson, who was involved with the development of the first Euston station, continues to be part of the station’s story”.

Among his many achievements, Robert Stephenson developed the London and Birmingham Railway which opened in 1838.

It was the first intercity railway into London and sparked the “railway mania” of the mid-nineteenth century.

CSJV and Network Rail also worked with the Railway Heritage Trust and Historic England to ensure all conservation guidelines were followed before, during and after the statue’s removal.

Laurence Whitbourn, Euston area director for HS2 Ltd, said: “As we build Britain’s new high-speed railway, we are continuing Robert Stephenson’s work and improving Britain’s rail network for years to come. We are grateful to Network Rail for being  the custodians of the statue for many years, and CSJV for managing its removal with such sensitivity, and I look forward to having the statue back at Euston in pride of place in the new HS2 station.”

Caroline Raynor, lead archaeologist at Costain-Skanska JV, said: “Robert Stephenson played a hugely significant part in the development of the railway in the 19th century. Costain-Skanska JV are proud to be part of the team who are protecting this Grade II Listed statue so that it can be reinstated to watch over future generations of rail travellers as they make their way through Euston. Amongst the team he has become something of a favourite and a heritage celebrity – our engineering mascot as part of a huge railway engineering project.”

Andy Savage, executive director of the Railway Heritage Trust, said: “The Railway Heritage Trust understands and supports the statue’s temporary removal from the site.  HS2 Ltd has consulted us several times, over the principle of its removal, the method of doing it, and how it will be stored. In our view they have been totally professional about this.  We look forward to the return of the statue, which we would hope can be reinstated in its original position between the two Euston Road Lodges. HS2’s works make this option possible for the first time in 60 years.”

As the redevelopment of Euston continues, steps are being taken to safeguard the station’s other heritage assets including the plaques commemorating Victoria Cross recipients.

London Waterloo comes out as top of the stops

London Waterloo regained its status as the most used railway station although its total number of passenger entries and exits is less than half...
Read more
HS2