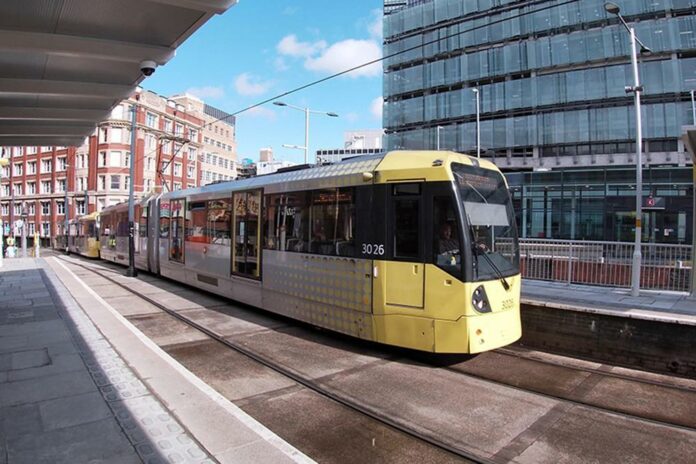 Police and transport staff have taken swift action in response to a spate of youth-related antisocial behaviour on the Manchester Airport Metrolink line.

Greater Manchester Police’s Transport Unit, working with operators and TfGM as part of the region’s TravelSafe Partnership, is reviewing footage to identify those involved and has increased patrols in the area at targeted times.

The action comes in response to 19 incidents – including intimidation of staff and passengers and criminal damage – reported at various locations on the Airport line during the week beginning Monday 28 December 2020.

The incidents, which have mainly been reported on weekday outbound services between 3pm and 9pm, have mainly targeted the rear cab of double units from the platforms.

As a result, and with passenger levels at about 15% of their pre-COVID levels, double trams have temporarily been removed from the line and been redeployed elsewhere on the network.

Transport for Greater Manchester’s Head of Metrolink, Danny Vaughan, said: “With coronavirus cases rising at such a rate its vital to reiterate that, in order to protect the NHS and save lives, you must not leave your home except for legally permitted reasons.

“Given the severity of the current situation, it’s very frustrating to see a small group of youths congregating, causing antisocial behaviour and totally disregarding the lockdown rules.

“Those involved are aged about 12 to 15 and I would ask parents or guardians to make sure they know where their children are and what they may be up to.

“For those that do need to travel, I’d like to reassure them that Metrolink remains a safe way to do so and this type of behaviour will not be tolerated, which is why we have taken immediate action to prevent further incidents and identify those responsible.

“I’d also like to reassure them that current passenger levels mean the removal of doubles should not impact services or the ability to social distance, although we will continue to monitor services closely and make changes where necessary.”

Inspector Jon Middleton of GMP’s Transport Unit, said: “Following a number of reports of antisocial behaviour on the Manchester Airport Metrolink line, GMP has been working closely with TfGM and partners to ensure the Metrolink remains a safe way to travel.

“I would like to take this opportunity to stress that we will not tolerate this type of behaviour, as not only are those involved causing a nuisance, they are also showing a blatant disregard of the latest COVID-19 restrictions.

“It’s easy to underestimate the impact antisocial behaviour has on other passengers when in fact, it is very unsettling and distressing, especially in unprecedented times such as these.

“We are dedicated to tackling this kind of behaviour as public transport should be a safe way to travel. Over the coming weeks, we will be increasing patrols in the area and working with partners and local neighbourhood policing teams to identify the individuals suspected to be involved.”

The multi-agency TravelSafe Partnership, takes a problem-solving approach to preventing and deterring crime and antisocial behaviour on Greater Manchester transport.

The Partnership shares data and intelligence and, thanks to bodycams, call points on all trams and stops, over 2000 CCTV cameras across the Metrolink network and a 24/7 control room, helps coordinate a quick response to live incidents.

During the pandemic the TSP has already run 44 days of action in 28 different locations across the region to remind passengers about the importance of wearing a face covering and other safe travel measures.

The partnership has also distributed more than 7,500 free face coverings to passengers on the tram and bus networks, run marketing campaigns and carried out targeted work with schools to increase compliance amongst young people in specific areas.

Govia Thameslink Railway (GTR) has set itself a target of 220 employees starting an apprenticeship, which is a 20 per cent increase on the...
Read more