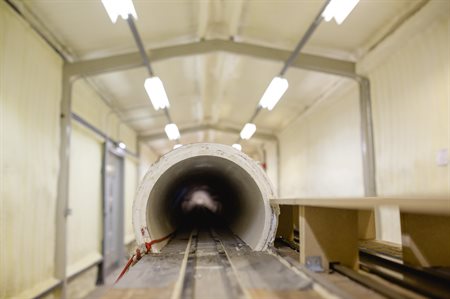 The TRAIN rig is a unique facility which allows researchers to examine the aerodynamic effects created by moving vehicles and the impact on their surroundings. It is part of the University of Birmingham’s Birmingham Centre for Railway Research and Education (BCRRE), and underpins much of its railway aerodynamic research.

The facility upgrade has been funded by the UK Collaboratorium for Research into Infrastructure and Cities (UKCRIC), which has delivered more than £27 million of investment in new facilities for the University. UKCRIC’s vision is to create, operate and coordinate multi-disciplinary research programmes to make UK national and local infrastructure (such as transport, water, waste, energy and ICT systems) fit for purpose for supporting societal development in a changing world.

The instrumented 150m long track allows researchers to fire models at speeds of up to 80m/s (close to 180mph) to examine a whole range of different aerodynamic effects including slipstream development and pressure effects. Recent railway aerodynamics projects have included works for RSSB, High Speed 2, ARUP and Bombardier.

The newly re-opened TRAIN rig now has a large, 45m extension, allowing a 30-fan return flow crosswind tunnel to be added into a 7m wide, 15m long stretch of the running track. Researchers can use this capability to provide more detailed outputs under a greater variety of wind conditions.

Dr David Soper, Lecturer in Vehicle Aerodynamics at the University of Birmingham’s School of Engineering and BCRRE and Manager of the TRAIN facility, said: “We are pleased to be operating this upgraded facility and it has already been in use with new research projects, including an investigation of air movements around platooned autonomous road vehicles.

“The crosswind facility will allow us to realistically explore the effect of winds on moving vehicles, considering not only mean winds, but also gusts.

“The state-of-the-art scientific instrumentation is already allowing us to understand previously unexplored concepts in vehicle aerodynamics.”

Derby’s Rail Technical Centre is operated by commercial developer and sustainable regeneration expert LCR. It took over the site in 2013, and has since transformed it into a thriving new business park, enhancing its wider engineering expertise and capability, and supporting the development of new facilities for both the University of Birmingham and the University of Derby. With over 30 tenants, RTC Business Park is now one of the city’s biggest employment sites.

An investment of 4.5 million is set to give a helpful boost to the power electronics, machines and drives (PEMD) industry. The money is being...
Read more
Research

A new initiative that could help drive innovative solutions to the UK’s future transport needs has been welcomed by light rail experts. The latest meeting...
Read more
Passenger

Transport for the North: North of England led return to rail in 2021

Transport for the North (TfN) has released figures that show despite infrastructure constraints and reduced levels of service, the North of England has consistently...
Read more
- Advertisement -