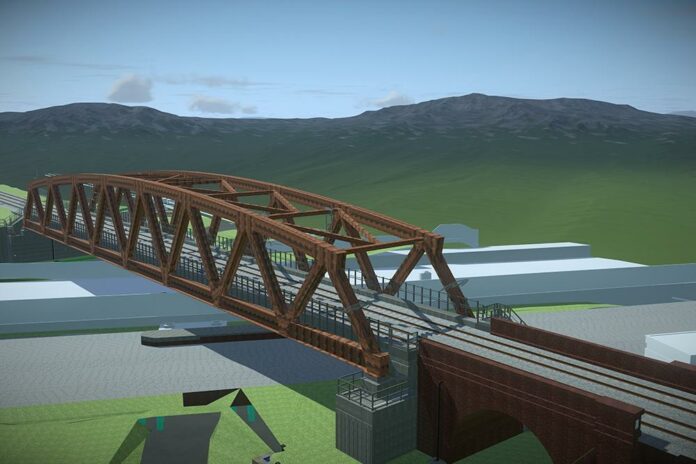 Skanska has been awarded a £52 million contract for the replacement of the SAS13 bridge on the Stechford to Aston (SAS) rail line, paving the way for the new HS2 route.

The contract has been agreed as part of Skanska’s work under the Infrastructure Projects (IP) Central Framework for Network Rail.

The existing bridge, comprising eight masonry arches and a central steelwork span, will be demolished and replaced with a single 92 metre-span steel structure. The works will pave the way for the construction of the new HS2 line approach into Birmingham City centre and the planned HS2 Midlands Maintenance Depot.

The Stechford to Aston (SAS) rail line and Derby to Birmingham (DBP3) rail line over which the new bridge will span, that run to the east of Birmingham city centre, are key routes for freight and local people. Skanska has worked closely with Network Rail and its supply chain partners to optimise up time on the rail line during construction, supporting Network Rail’s Putting Passengers First vision.

“We’re delighted to win this contract and to be working with Network Rail on this key project,” said Jonathan Willcock, Managing Director of Skanska’s infrastructure business.

“It builds on our long-standing relationship with Network Rail, where we have a successful track record of delivery – particularly in the North West & Central region. We understand the region well and have built excellent relationships, including with our supply chain partners. We’re now very much looking forward to getting started on site.

“We’ve worked really hard over the past two years with Network Rail to ensure that passengers are at the heart of our solution, which will optimise rail services during construction while bringing carbon and cost savings.”

Neil Gaskin, Head of Capital Delivery (Central) at Network Rail added: “Both teams have worked tirelessly to achieve this first key milestone, I am personally looking forward to working with Skanska to deliver this strategically important project. This structure is a key element of the Water Orton Corridor programme of works, which is critical to HS2 overarching strategy.”

The bridge, which will be the largest single span railway bridge in the West Midlands, has been designed to minimise the steel tonnage. This, combined with offsite fabrication and the use of ground granulated blast furnace slag (a waste material from steelwork manufacturing that will replace most of the cement in the concrete) will help to reduce carbon on the project.

The £52 million contract is in addition to development services work that Skanska has already delivered during the detailed design and enabling works for the project, valued at £14 million.

The project is due for completion in September 2022.

The railway has a big role to play in helping tackle climate change through the sustainable service it provides to passengers and freight operators.   The...
Read more
Infrastructure

A major milestone has been achieved on the Birmingham Eastside Metro extension following the installation of the first section of track in Digbeth. A total...
Read more

HARTING’s Railway Web-Seminar series continues with a look at their new product innovations for rail, which will be launched at InnoTrans 2022. InnoTrans is the...
Read more