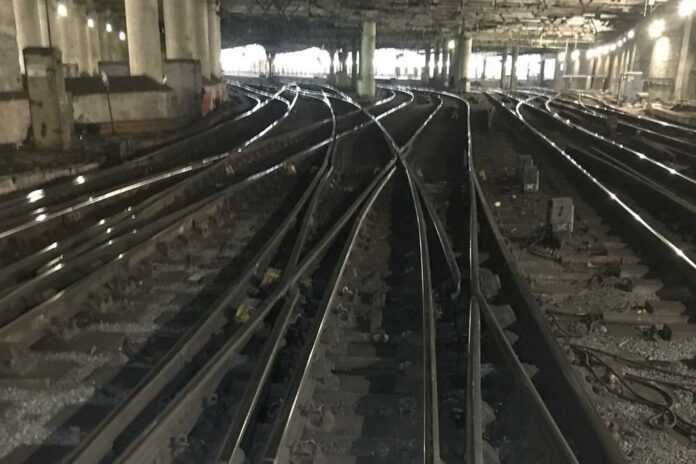 Network Rail has completed an innovative 12 month programme of electrical works, infrastructure upgrades and operational changes to boost reliability on a critical section of track between Liverpool Street station and Bethnal Green.

Known as the Golden Mile, the track is the busiest stretch of railway on the entire Anglia route. It is used by every train entering or leaving Liverpool Street, so any problems can cause significant delays and cancellations for passengers.

Completed at the end of August, the improvement programme included the replacement of 300 insulated block joints (IBJs), which are pieces of equipment used to separate electrical circuits on the track. IBJs are crucial because they allow the computerised signalling system to pinpoint the exact location of trains in the area.

If an IBJ fails, which happens more often as they get older and wear out, to keep everyone safe all the trains are stopped. Unfortunately, this can cause hours of delays while the system is repaired and the service gets back to normal. The new IBJs on the Golden Mile are far less likely to fail than the equipment they have replaced, reducing the possibility of disruption. Engineers are also developing new ways to maintain and clean the IBJs, which will help to keep them working effectively into the future.

As well as general wear and tear, IBJs can be badly affected by small metal shards that are formed over time when train wheels grind against the rails, or when trains test their brakes. In order to protect them, Network Rail worked with the train operators that use Liverpool Street station to agree that trains will no longer test their brakes in the area. The engineers also added magnets to attract the metal shards away from the most sensitive parts of the equipment, while maintenance teams will increase patrols of the area with special magnetic rods that remove shards from the track.

Alongside the this work, engineers have taken the chance to install tough new high-tensile bolts on the movable parts of the track that allow trains to switch from one line to another. The bolts on this kind of track get worn out particularly quickly because they have to absorb a lot of force from trains, but the new bolts are made to last longer than the previous type, helping to make the Golden Mile as reliable as possible.

Statistics show how the programme has already reduced delays. In the 16 week period from 1 April 2019, when work was just getting started, there were 8530 minutes of delay caused by track and point faults outside Liverpool Street station. Over exactly the same time period in 2020, when the work was coming to an end, there were just 861 minutes of delay caused by these faults, a landmark achievement even taking into account the fact that fewer trains were running over the lockdown period.

Ellie Burrows, Network Rail route director for Anglia, said: “The track between Liverpool Street station and Bethnal Green is vitally important on our route and being the busiest section, reliability here is crucial to the whole network. We decided to intensify our focus on this part of the railway to drive down delays and deliver a better service for passengers.

“The completion of this work last month is a milestone in our journey to transforming the Golden Mile. It shows what we can achieve through a combination of innovative engineering and close collaboration with our train operating partners.”

Jamie Burles, Greater Anglia Managing Director, said: “A majority of our services use the Golden Mile stretch of track so it’s crucial that it’s maintained to the highest standards.

“We are working with Network Rail and are doing all we can to improve performance and punctuality and it’s great that we are already reaping the benefits of this engineering work.”

Seven new ticket gates, an open-plan ticket area, enlarged waiting room, café and toilets are now in use as part of a remodelling of...
Read more