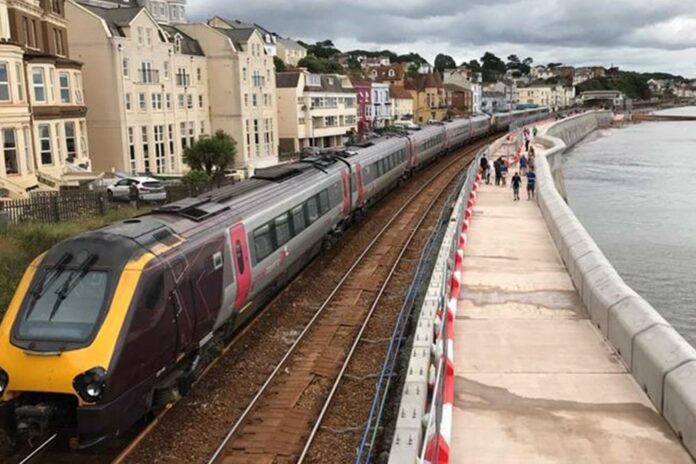 The vital stretch of railway which connects Devon and Cornwall with the rest of the country is now better protected from rising sea levels and extreme weather as Network Rail has built the first section of the new sea wall in Dawlish.

It means the beach and promenade is now open with Network Rail adding finishing touches to the surface of the footpath, before returning later in the year to finish fencing, lighting and seating after delays caused by coronavirus.

The new bigger sea wall runs for 360 metres along Marine Parade, giving the iconic stretch of railway line immediate greater resilience against waves that flood the track, leading to potential closures and delays.

Network Rail has faced delays of crucial materials for the new sea wall throughout the pandemic, but teams of engineers worked around the clock in recent weeks, within Government guidelines, to enable the reopening of the beach and promenade in time for the peak tourism season.

The footbridge that connects Marine Parade to Boat Cove is also open but delays mean engineers will continue to work 24 hours a day for three weeks during the summer to install granite paving at Boat Cove and the viewing point halfway along the wall. Permanent fencing will then be fitted between the railway and the promenade. Then, following the summer engineers will install lighting and seating.

Building of the new sea wall began in May 2019 following the Government’s commitment to spend £80m on a new sea wall stretching all the way from Coastguards breakwater to Boat Cove, following the storms of 2014 which closed the line for eight weeks.

The design, with a curved top to deflect the waves, follows years of detailed studies, designs and joint working between world-leading marine, coastal and railway engineering experts.

Construction has taken place around the tides to deliver the upgrade, which is vital, not just for Dawlish but for the whole of the south west peninsula as the railway connects communities in 50 towns and cities with the rest of the UK.

Network Rail has also submitted plans for the second section of the wall – a 415 metre stretch between Coastguards and Colonnade breakwaters – to Teignbridge District Council. Work is expected to start later this year if the proposals are approved. The plans include a new, high-level promenade and an accessible footbridge with lifts for Dawlish station.

During the building of the sea wall at Marine Parade, Network Rail has spent nearly £5million on local labour, materials and accommodation; work on the remaining section would give a similar boost to the local economy.

Mike Gallop, Network Rail Western route director said: “We’d like to thank the residents of Dawlish and visitors to the town for their patience during the main construction work.

“There is more to do before this section of the project is completely finished. We faced delays in our supply chain due to Coronavirus and therefore will need to return to complete the paving, fencing, lighting and seating – but we are pleased that we’ve been able to reopen the beach, promenade and footbridge for summer visitors.

“The new sea wall is already doing its job by returning waves to the sea and reducing the amount of water and spray reaching the tracks. It will help to protect the town and the railway for the next 100 years.

“We’ll continue to keep the community informed of our progress and our proposals for the remaining section of the new wall.”

Rail Minister Chris Heaton-Harris said: “It is fantastic to see this vital project making so much progress despite the challenges it has faced due to Covid-19, and this is testament to the hard work and dedication of all the teams involved.

“We are committed to improving the resilience of this route, which is crucial for connecting communities across the south west and boosting economic growth in the region.  I look forward to seeing this important work completed later this year.”

Chair of Peninsula Rail Task Force, Cllr Andrea Davis said: “The PRTF welcomes the fantastic progress that has been made along the Marine Parade, as well as the new sea wall, at Dawlish.

“The project has faced substantial challenges in recent months, as a result of the Covid-19 pandemic, and it is a credit to Network Rail and all those involved that the project has been able to progress to this stage. Ensuring that this crucial link between the South West and the wider UK remains open, is vital to the economic success of the region.

“There is still a lot more work to be done to secure the future resilience of our rail network and the PRTF will continue its work with the Government to build upon their efforts to level up the region, delivering a rail infrastructure fit for the future.”

A special fleet of ‘leaf-busting’ trains have started blasting leaves off the line to help keep passengers and freight moving across the West Midlands...
Read more
Infrastructure

Haxby station progress to be discussed this week

Senior councillors in York will receive an update on progress to bring a railway station back to Haxby for the first time in nearly...
Read more